Two Animals of the Same Breed

What can I say? Those Danes over at T-Rex just know a good thing when they hear it. When I first heard T-Rex was going to be dishing out the T.C. Jauernig line I was absolutely stoked. What better way to bring some much deserved attention to one of the stompbox world's premier boutique builders. I had been aware of Tim's pedals for quite some time and in fact had had a chance to try some of his original builds. The difference between the T-Rex stuff and Tim's you ask? There isn't any, not to my ears at least. They are still the same kickass sounding pedals they have always been, with all the same mojo, finesse, and stunning tone. Below are two awesome examples of what T-Rex has done with the Jauernig line. And believe me, once you dig in you will be hooked!
------------------------------------------ 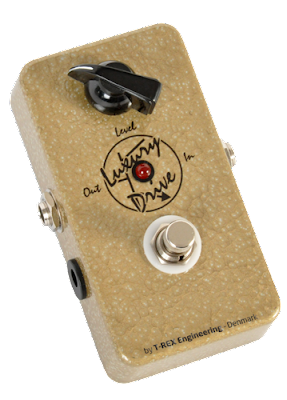 LUXURY DRIVE
Booster
It seems like every time I turn someone on to this little gold pedal it ends up being a favorite. Looking at the Luxury Drive one might not think there's much to it. On board you'll a single solo knob, a true bypass switch, and an LED. But this is exactly what makes this pedal so desirable. No matter whether combined with pedal or amp, this is a booster that comes through beautifully. The reason for this is the transparent and non-pirating nature of of it's tone. Instead of taking you back to square one (which many boosters can do), the Luxury Drive pushes your sound forward. Delivering size, volume, and the power needed to get you amp growling and howling. I dialed in some of my favorite guitar tones to see just how much this pedal was capable of. The end result was quite impressive.
I'll tell you right now, having a pedal like this around can really really come in handy, no matter what the situation. My run-through of the Luxury Drive consisted of a handful of gigs, band practices, and even recording sessions. In each and every one of these applications I could not have been happier with this little monster. One of the setups this pedal really did wonders with was with my 7/15 watt head and 2x10 cabinet. I am a huge fan of rocking out to small wattage amps, but the drawback of small amps of course is once you've pushed them to their limits they're done. Here is where a sweet sounding non-coloring booster like this comes in to play. We can all agree there is nothing better than the sound of a vacuum tube being pushed over the edge. If I can help it I never try and get in the way of that. There's something about pure uncut tube tone that just makes things sound and play that much better. With my little amp I was able to dial in an awesome sounding rhythm crunch, get semi-clean tones by rolling back the guitar's volume, then by stepping on the Luxury Drive take the amp's tone into lead tone territory. Perfect for small gigs, bedroom rocking, and sessions. Another great mash-up was the Luxury Drive pushing my Deville's huge clean tone and overdrive pedals. I very rarely push my Deville past 6-7. I've actually modified it with tighter bass, thicker mids, better volume roll-off, and have it stacked with four 100 watt 10" Jet Series Jensen's (2 Blackbirds & 2 Tornados). Let's just say I've got more than enough headroom on tap. When playing through this amp I always rely on pedals for my dirt tones. I used the Luxury Drive first to boost my clean signal. At the time I was playing with another guitar player who did not know the meaning of tailoring his sound. I was able to boost my signal so that'd it cut through and become more focused. Pushing my overdrive, distortion, and fuzz pedals was another great way to use this pedal. With some pedals you can't take them too far or else they start frizzing out. With the Luxury pushing my pedals I could dial in the sweet spot then take it further by boosting it. I was also able to boost other effect like chorus pedals, vibes, and delays without screwing up their vibe. Last was pushing this baby through some big wattage. A 100 watts of Super Lead muscle did the trick beautifully. Here the Luxury Drive really worked it magic. Whether pushing the fierce sound of the amp's drive, amp's dirt mixed with a fuzz box, or using the Luxury to push me into distortion tones. It was all a okay. Guitar wasn't the only instrument this pedal sounded good with either. So whether on the gigging or recording trail, band practice or solo session. The Luxury Drive will do you solid.
------------------------------------------ 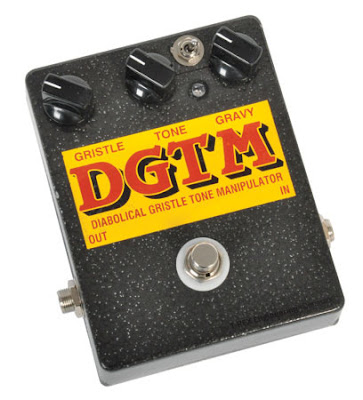 DGTM
Overdrive
Here is definitely an overdrive pedal in it's own class. The Diabolical Gristle Tone Manipulator (or DGTM) has an ability to shape and mold some tones all it's own, while also capable of bringing you to some of rock's most memorable dirt tones. On board this pedal you will find a Gristle (Overdrive), Tone, and Gravy (Volume) controls, and a 2-way voice toggle switch. With these four little controls this pedal will do a lot let me tell you. Many overdrive pedal you're lucky to get one golden tone from. With the DGTM you'll come to find more than a handful. For me the mojo from this pedal definitely comes from it's wide range Gristle control and 2-way voicing switch. Don't get me wrong, it's Tone control has the ability to match up to any amp or pickup, and the Gravy control has more than enough output to drive anything you throw at it. But it'swhen combined with it's two other trinkets that this pedal really comes to life.
To see just exactly what kind of power this pedal had behind it I first ran it through a series of different clean tones. The amp's of choice were a Twin Reverb, a Deville Hot Rod, and a AC 15 clone. Guitar for the job were a humbucker equipped Hagstrom Viking, 60's Strat build, Junior copy, and National Lap Steel. The Twin/Strat combination was definitely one of my favorites. By setting the DGTM's toggle switch in the vintage position I was able to get some spot on "cut'n'dry" SVR tones. The pedal oozed with aggression, clarity, and warmth. The more I rolled up the pedal's Gristle the more the Strat bit. Cranked to the max I got one of the sweetest classic rock/blues lead tones I have ever heard come from the Twin's clean tone. This is exactly what makes this pedal such a winner. You can't tell the difference between the amp being pushed into overdrive vs the pedal creating an overdrive tone. Another tone through the Twin was the lap steel. The syrupy tone of the lap steels strings blended beautifully with the DGTM's creamy/smooth tone. The ultimate was adding in just a hint of the pedal's drive with the toggle set to modern and the tone set super warm. The subtle compression of the modern setting really came through nicely without being overpowering. Really no matter what eq setting I threw at the pedal I got great results. Next up to bat was the Vikings mean buckers and the Deville. Here I started with everything on the amp set to noon, except for the reverb set at 2-3, and presence at 5. I began with just a bit of the DGTM's gristle, the tone at noon, and the gravy set to match the amp's outout. The humbuckers powerful output grabbed on to the little bit the pedal was dishing out and I got a great semi-clean tone I was able to bring in and out of grit with just the touch of my strumming. The string articulation even at this low low setting was spot on and the amount of clean string action I was able to get was fantastic! It didn't take much to get the humbuckers singing. With the gristle at about 9'o'clock I was already getting some pretty interesting grit and grime. The medium overdrive with the four 10's in the amplifier really punched through with lots of force and definition. Switching back and fourth from vintage to modern modes I could either get a super steady compressed rhythm tone, or a loose in your face vintage rockin' tone. It seemed like the more overdrive I cranked from the pedal the more control over my tone I was able to get. At full blast I got a straight up heavy rock overdrive that worked great for everything from metal, punk, alternative, classic rock, and blues. Again the option of the modern to vintage switch gave me tons of variety and flavor. Last I rocked the Junior copy through an AC 15 clone. The combination of the P90's power and cutting AC tone ended up being a perfect candidate for the Diabolical one. There was thing I wanted to try before I got into anything else, and that was cranking the AC 15 into screaming overdrive on it's own then adding in the pedal to see what kind of sounds I would get. Just like I expected it was all gravy! With the amp I got a slicing good dirt signal, and with the DGTM I leveled it out by introducing in a warmer/tighter sound. This too ended up being great for gigs and recording sessions. I never like to get too much stage volume from my amp and enjoy a nice well balanced mix from the monitors. This pedal and this amp ended up being a perfect choice for this. After this there really wasn't much left to do, other than blend both the Luxury Drive and DGTM together. Like two birds of a feather they sounded stupendous together. Both with the booster i front or with the DGTM in front I got sweet sweet sounds. The Luxury pushing the DGTM handed me an entirely collection of tones to play with, leaving me with my jaw on the floor. I give the T-Rex just as much props as I do the original DGTM. It don't matter if you play hard rock, metal, blues, country, or punk. This pedal does it all.
-----------------------------------------------------
For more info on T-Rex pedals go to www.t-rex-effects.com or click the direct link on our sidebar. We have more awesome goodness coming at you from T-Rex in the near near future so make sure to tune in.
Posted by Alfie Cruz at 11:00 PM