Dig in and enjoy 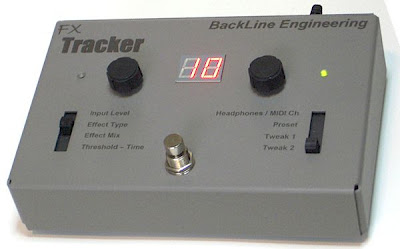 Backline Engineering
FX-Tracker
-------------------------------------------------
If I were to sit here and list all the features and possibilities that the FX-Tracker was capable of we'd be here till tomorrow..... no wait, we'd be here till next week! The FX-Tracker turned out to be one of THE most versatile and flexible effect units I have ever laid my hands on. Imagine being able to control the character of your effects with your playing style and pick attack. Being able to control the speed, depth, and time of each effect in a way that would create sounds not ever possible before. Imagine a pedal capable of dishing out an entire library of effects without lack of sound quality and with a range of control capable of keeping you busy forever more. This is definitely not your everyday multi-effects unit, instead think of the FX-Tracker as an effect unit of it's own breed. Within this unit you will find all of the key effects such as delay, chorus, tremolo, flanger, filter, pitch shifter, and arpeggiator. The FX-Tracker sports up to 87 different variations of it's effects, has up to 100 preset locations, and has MIDI output capabilities. Along with the main effects this pedal can also do things like place delay before, after, or in parallel with many of the effects. Giving you some of the most unique and interesting ways to morph and manipulate your effects ever. You can also skip back and fourth between delays and other effects with the picking of your hand! Pretty damn cool huh? This thing dishes out stereo effects, has up to 60 seconds of stereo delay as well as looping abilities, can pull off whammy effects, can be triggered by MIDI drum machines (along with many other MIDI functions), can control effect parameters with expression pedal, can work two delays at once and time them with with another ir with your playing, the list goes on and on. For more info on the FX Tracker just check out the website, you will be blown away! 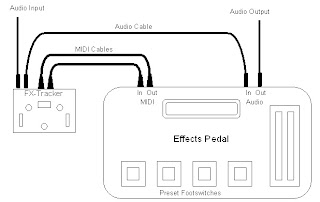 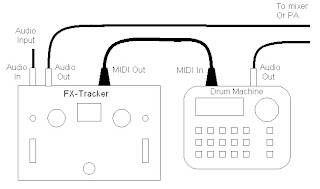 I didn't get too much into the MIDI capabilities but my partner who is much more skilled at this did and when he came back from a couple days of playing with the FX Tracker he was in shock. OH HOLY I ALMOST FORGOT!!!! Volume pedal tricks!!! Never ever ever ever in my life have I been able to pull off volume pedal tricks as easily as I was able to with this pedal. The slower in between my notes the longer the volume would take to ramp, the quicker I would play in between notes the faster the volume ramp would snap in. Absolutely genius. With lap steel this was an absolute dream. And with the ramping/harmonizing trick I mentioned above I could get killer pedal steel effects, with my guitars too! I really don't want too bore you with lots of writing so I'll cut it here. The FX Tracker I assure you can do much much more, and much more complex tricks. This was only a small introduction of what Backline Engineering's amazing tone tool is capable. If ever there was a pedal that spoke for itself this is it. One session with this thing and I promise you'll be hooked... hooked to the gills! Backline also has a handful of other gadgets which I am very curious to try out. I promise I will try my best to bring you the rest of their stuff in the near future. For now let the FX Tracker's magic soak in and dream of any effect you've ever wanted... cause thing can do it.
------------------------------------------------------
For more info on Backline Engineering and it's awesome FX Tracker go to www.backline-eng.com There is a bunch more amazing information on the FX Tracker and the rest of their products. You can also check out audio clips and much more. Stay tunes for more from Backline in the near future. Go out and get this pedal before it is no more!!!!