Trem-o-lo For Days and Days 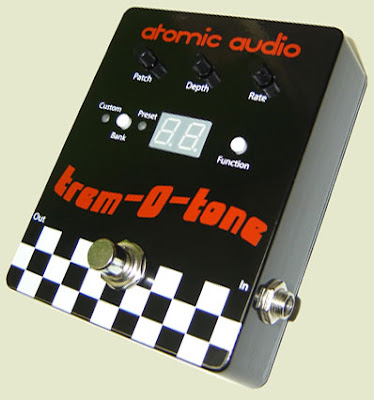 Trem-O-Tone
Controls
----------------------------------------------------
I found an amount of control and variety in the Trem-o-Tone that was unlike any other trem box I have ever played. The only other place I have found this much control over an effect is probably in a plug-in. We all dig creating cool sounds in the studio to layer onto our records. But what happens when we want to take some of those sounds onto the stage? This is where this pedal stepped in and took over. Let's first look at this pedal's ability to act as a regular old tremolo. Like any old tremolo on the Trem-o-Tone you will find Depth and Rate controls. Combine combine those Depth and Rate controls with it's triangle wave, sine wave , and square wave LFO's and you have a tremolo capable of a world of sounds. You can take this pedal anywhere from smooth'n'round tremolo effects, to helicopter slice your head off chops. Then you tap into it's Patch control and come to find galloping, stuttering, triplet, skipping, swinging, and a handful of other tremolo effects. But the fun has only just started, these are only the factory presets that come stock with this pedal. The madness really begins when you incorporate the pedal's extremely easy to use studio software.... that's right, I said software.

Atomic Audio has created the Trem-o-Tone to work hand in hand with a studio quality, simple, but extremely versatile software program. Right next to the pedal's power jack you will find a USB port that connect the pedal to your computer. Once connected you can shape, mold , and bend your tremolo effect into whatever sound you wish. Leaving you with custom tremolo effects that you can incorporate directly into your tunes, gigs, and studio sessions. But there's more! All those killer wild'n'crazy sounds you create can be programmed and stored into your Trem-o-Tone for later use. The Trem-o-Tone holds 15 slots for user-defined patches and 10 slots for dedicated/factory preset patches. Giving you a slamming 25 different patches to choose from on the fly! You can check out more info on the Trem-o-Tone's software at the link below.
(http://www.atomic-audio.com/totsoftware.html)
-----------------------------------------------------
Once I worked in a little of own magic into this pedal I was off and flying. Right from the start things got interesting, and then from there only got better. The Trem-o-Tone was capable of turning everyone of my guitars and amps into a studio grade effects monster. I had my guitars, basses, lap steels, keys, and even vocals sounding cooler and wilder than ever. Then there was blending in the Trem-o-Tone with my favorite pedals, the possibilities quickly became endless. Even before I had begun to play around with the pedal's software though I was floored by the pedal's stock options and factory presets. These sounds alone were enough to make things interesting pretty damn quickly. I could tell right away that I was going to have one long night of tweaking and dialing in. The first sound I played around with was the pedal's helicopter tremolo effect. I was able to dial the exact amount and intensity, which gave me the exact vibe and sound I was looking for. You will find with other trems that are capable of helicopter sounds that they're a bit too harsh. Getting them to knock out a crazy sounding chopping trem is simple. But then try to get back to usable medium and things end up being damn near impossible. This was not a problem here. Once inside the Atomic Audio's software I was able to draw in the exact amount of rise and fall needed to build the perfect chop tremolo. I was able to make the climb of the effect intense while keeping the tip of it round and subtle. Mastering and perfecting the Trem-o-Tone's software is something that won't take a class to learn. You can literally jump right in and start creating cool sounding usable effects. The Trem-o-Tone sounds insanely great with other effects too! Blending my chopper sound with a killer sounding fuzz box and wah pedal provided me with a sound I had been dreaming about for ages. I was able to mimic an arpeggiator type of an effect, with the wah letting me control the frequency in real time. Very cool stuff! When I did this for a couple friends they were baffled at how had accomplished this. The quality of the pedal's sound is also something you will fall in love with right away. There isn't one cheap or cheesy sound possible from this pedal. Next was some good'ol 3/4 goodness. I have written so many songs in 3/4 where I'd wanted to use tremolo, only to find it has sometimes been impossible. Again, not a problem with the Trem-o-Tone on hand. Not only was I able to match the exact tempo and feel of the tremolo to the songs, but I was also able to take it a step further into following the exact rhythm of the tune. There are things that drummers do that I've always wanted to follow with just a stroke of my guitar. With this baby it is not a problem. As an effect for layering and adding textures this pedal sits way up high. All you alt-rock, psychedelic, experimental, fusion, funked out guitar players will love this pedal. Next I brought in some delay and the fun really got out of control. Ping-ponging and echoing the galloping and stuttering effects from this pedal was out of this world. I got the strangest/coolest sounds ever! The amount of flexibility you can dial into your custom effects is also something that is quite impressive. The Depth and Rate controls provide your custom effects with so much range that you find it damn near impossible to get bored. I sat playing around with same sound for hours and hours. I found getting fresh and usable sounds from this pedal was as easy as dreaming them up, and programming them in with the software. All those crazy clever sounds that you come up with you can now bring with you anywhere. Now, I could go on forever about the capabilities of this pedal, or you can check one out for yourself. Players today are on a mission to revolutionize the rock and roll world by creating interesting and imaginative soundscapes. It is tools like this that are going to help us do it too. I can totally dig where Atomic Audio is coming from and see exactly the direction in which they are going. I would kill to see a phaser or wah pedal from them with the same capabilities (hint hint). Tap into your creative side and let the Trem-o-Tone speak your mind's eye.
--------------------------------------------------- 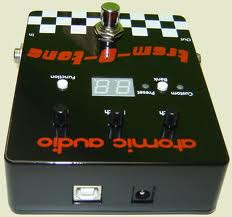 For more info on Atomic Audio go to www.atomic-audio.com You can read up on tons more info on the Trem-o-Tone. I'm telling ya'll, we only scratched the surface on what this pedal is capable of. Let'em know we sent you.
Posted by Alfie Cruz at 7:21 PM