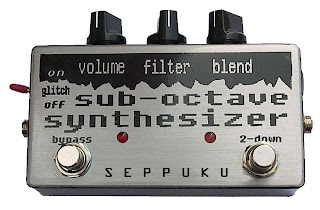 SEPPUKU FX
:Sub Octave Synthesizer:
This week's "Step On This" pick was easy, straight from the box this killer sounding pedal was a blast to play around with and then some. Now for those of you that don't know, Seppuku FX once known as Diamond Skeleton Pedals are still being built by the same cat, the only thing that's changed is the name. What and who is Seppuku FX you say? Rhys Gillespie is the one man building machine bringing us these unique and original pedal designs. There are lots of pedal companies out there right now building oddball effects and devices, most of the time gimmicks or trickery. The Sub Octave Synth isn't one of these pedals, it is beyond just another noise box and it sure as hell isn't a toy. A run down of it's controls: Volume, Filter and Blend knobs, mini toggle switch for Glitch control, Bypass and 2-Down foot switches. True bypass, runs off of 9v battery or 9v 2.1 mm centre negative power supply. The build of the pedal is pure eye candy, simple straight to the point graphics with a fun nontraditional layout of the controls. The SOS works in more ways than I'm sure I've discovered. As a fuzz box it's great because it isn't your normal run of the mill fuzz effect, it's like it's own breed of fuzz giving you killer new colors to add to your music. Behind the fuzz is always a hint of synth like textures, depending on how you manipulate the Filter and Blend knob. It's definitely a modern take on some of our favorite classic fuzz and octave boxes, but where many fail Seppuku has flourished. The octave effect tracks like nobody's business, I was blown away by the quality of the sounds it dishes out. Add a little reverb to this pedal, plug in your favorite guitar and you have the most haunting, epic screeching rock tone you've ever heard. If you want all out crisp clean tracking synth effects just roll the Blend all the up, back it off a hair and set the Filter for how low or high you want the tone. Where the pedal gets really buck wild is when the 2-Down switch is engaged, it will rival your favorite synth keyboards. Now my favorite effect this pedal produces, the octave fuzz effect. I've never been able to find an octave fuzz pedal that I really dug on, most just sound all the same or are too damn bland. This pedal creates the wildest psychedelic octave fuzz effect ever! My band has officially found a new signature sound to create on, thanks to Ryhs and his SOS our new record will have some unpredictable tones and textures. I literally only scratched the surface of the pedal but will keep you posted as I discover new ways to use it. I'm very excited to get my hands on his Digital Pitch Modulator and as soon as I get my hands on one I will give it a go here on Analog War Cry. Also look out for Seppuku FX video and audio demos in up-coming posts. You can visit Seppuku FX at www.seppukufx.com and also purchase his pedals at www.fuzzhugger.com & www.crushthebutton.be
-Alfonso C.
Posted by Alfie Cruz at 1:00 AM