Is Electro Harmonix building a new version of the Deluxe Memory Man? 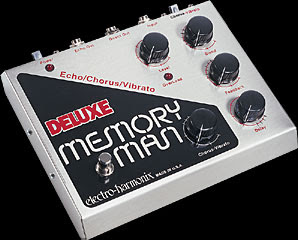 When I think about killer sounding analog delay my mind always goes to the same place, the Memory Man. You have to admit, in it's time of release there was nothing out there that sounded as good or came close for that matter. Even today there are very few delay pedals can muster up as good an effect as the MM. To be completely honest I myself have never owned one, I've had the pleasure of using a handful of different version in the studio and borrowed some for gigs. All of them have sounded equally as good, from the Memory Man to the Stereo MM, the Deluxe to the reissue, all of them kick major ass. I guess the one reason I have never been able to bring myself to get one for myself is the pain in the butt size of the box. I can't be for sure certain but I'm almost positive that the components inside the large box are few, or at least capable of fitting inside a smaller case. To this day I have never seen someone rehouse one, I've seen many other pedals rehoused but not the EHX MM. Well I have some news to share with you and I'm almost positive it's true, you can even look for yourself. I was doing some Youtube surfing on the EHX channel when I came across a factory tour filmed by the Boing Boing Video Youtube channel. Upon close inspection towards the end of the tour you can see what is most certain a Delue Memory Man in the smaller diecast box that EHX uses to house pedals like the Bass Metaphors, Bass Micro Synth, Holy Stain, Q-Tron+ and new version of the Graphic Fuzz. The date of the factory tour was posted on Jan 27th 09, so it is possible that this could be a new EHX Memory Man build. You never know it could just be a prototype that they tried out at one time, but if it is something that they'll be releasing I'm stoked. I only hope if they do release in the smaller case that the components are all the same, I know there's been some talk about the parts used to build the pedal are running short. Anyhow check out the video for yourself and tell me what you think. The first shot of the pedal is at 4:03, and you can pretty much see it till the end of the video. Watch it at high quality and blow up the screen for a good shot of it.

You can read the entire Boing Boing article at http://gadgets.boingboing.net/2009/01/27/bb-video-inside-elec.html
Posted by Alfie Cruz at 6:59 AM