The classic tones of years ago are alive and doing well... 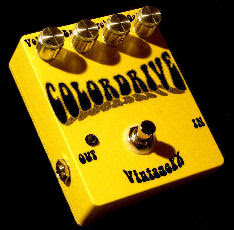 :::VINTAGE FX:::
Grand Island, NY
Builder: Dave Archer
Years in the game: 8
Flagship Box: ColorDrive
Artists/Bands: Black Rebel Motorcycle Club, Sweet Jane, The Warlocks, John Wesley, Rob Campanella, The Brothers Movement, The Black Crayons...
Websites: www.vintagefx.com - www.myspace.com/vintagefx
I first heard of Vintage FX early last year (2007) while reading an article on the fuzz tones of the Los Angeles psychedelic rock band The Warlocks. Being a long time fan of the band I had always been curious how they achieved  the signature fuzz tones of their records, one of the pedals responsible for the splendid ear torture was the Vintage FX Fuzzriot. There couldn't have been better timing for discovering Vintage FX, my band was in the studio working on new tunes and we were having a bitch of a time dialing in any usable fuzz tones with the pedals we already had. I ordered away for a box the next day , 4 days later we had the tones we needed and a lot more. The tones it produces easily mirror the best records of the 60's and 70's and creates some modern tones as well. It's great the range of use you can get out of it, as most of you know fuzz pedals a lot of the time can either be one-trick-ponies or they produce insane unusable noise (I won't point any fingers). Crank the Depth knob for all out fuzz war madness - roll back the Tone, play with your fingers for a warm buzzy blues tone - or ease up on your guitar's volume for mild to crunchy overdrives and distortions. A pedal perfect for layering guitar tracks. I emailed Dave letting him know how happy I was with the box, being a tone junky the Fuzzriot provided the immaculate fix that I had been hunting since day one. Like most of you I too am curious to hear what the rest of a newly discovered pedal company's effects sound like. I had to visit the VFX website again a do some listening of the rest of their pedals demos. Now the next pedal I got from VFX I'm very excited to tell you about...The Colordrive. Ever have an amp that you're close to dialing in a perfect tone from? The Colordrive will bring to life any kind of amp, from budget to midrange, boutique to high gain. It delivers tonal bliss to my 4x10 Fender Hot Rod Deville, it's the only pedal in my chain that is always on. As an overdrive pedal it is also great but where I've found it to really shine is as a booster. For the price it is hands down the best of it's kind that I have come across. Another area this works great in is as a Bass Overdrive. My band was looking to boost the bass during a live recording session and we plugged the bas into a Colordrive, we had no idea what to expect. Later on the recording we discovered how great it sounded. I know both Rob and Peter from Black Rebel Motorcycle Club use them in their rigs, as well as a handful of other cats. I recently shot some questions to Dave Archer to get more info on his quest as a builder and how he came to build these killer pedals.
Analog War Cry:
How long have you been building pedals?
Dave Archer:
I started building my own effects in 2001.
AWC:
What got you into building effects pedals?
DA:
A couple of things really. I had always used Boss pedals since I was a kid. Later when I discovered Fulltone I took a chance on a Fulldrive 2 and I was blown away. That kind of put the idea in my head. Mike Fuller was a pretty big inspiration for me, a great guy.
AWC:
The first pedal you owned?
DA:
The Boss DS-1. I still have it today and ended up modding it. It's one of the MIJ models, that's a keyword in ebay. I think it's really all hype though.
AWC:
What was the first thing you built and what inspired it? Was there a specific box that drove to that first build?
DA:
I wanted a Mosrite Fuzzrite, but the prices were insane, so I ended up building my own version. Later I ended up tweaking it a lot and the VFX Fuzzriot was the end result.
AWC:
What would you say is your flagship pedal?
DA:
The Colordrive. Everyone really seems to dig it. I myself have it on all the time, my amp just sounds lifeless without it.
AWC:
Anything new in the works?
DA:
I have a version of the Colorsound Supasustain that is really close, probably in the next couple months or so. Colorsound made some awesome pedals.
AWC:
I know this is the all time dumbest question but I'll ask anyhow. What is your all time favorite box?
DA:
My "favorites" are always changing. One week I'm digging a certain pedal and then the next I'm really into something else.