"These ain't your daddy's fuzz boxes." 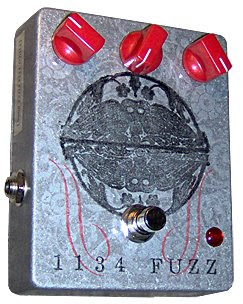 In the last year or so I've met some great pedal builders, one of the cats that comes to mind is Tom Dalton. A man on a mission to build a new breed of fuzz tones and useful gadgets. With the combination of avant-garde artwork and intelligent designs Dalton's pedals are quickly becoming some of the most popular, highly respected stompboxes the scene has gotten their hands on the last year or so. He is the beatnik of the effects pedal world, avoiding the conventional look and sound of the guitar pedal as we know it. Tom's work ethic is like no other person I have come across, always working on a way to better and revamp his effects. The Algal Bloom Fuzz is an example of this, it's facelift consisted of a fourth Starve knob that was added to up it's tone possibilities. Another FH(fx) pedal that recently went through some changes is The Hugger, a Duel Boost Loop/Pedal Awakener with two toggle-switchable boost circuits and toggle switchable true bypass loop in between them. For more reliability and consistency from pedal to pedal, The Hugger will now feature printed circuitboards (courtesy of good friends Mellowtone). There is also a new foot switchable version of The Hugger wthout the toggles. And the one thing that's for certain, that you can always count on, is the change of the artwork on his pedals, it makes it so that you have cool limited runs of them. Tom is also responsible for the Fuzzhugger.com website, there is a Myspace page in the works and a handful of new demos coming soon.
.................................................................................. 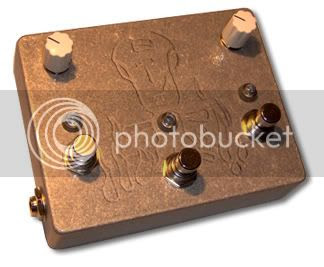 :::The Hugger:::
Foot Switchable Version
:Multi-Function Operation w/3 Foot Switches:
*Single Stage Boost (two preset-able boosts)
*Duel Stage Boost (with boost and master controls)
*A True Bypass Loop
*A True Bypass Loop w/pre or post-boost
*A Pedal Awakener - put a pedal in the loop, drive it's input or adjust it's output without tone loss/pedal volume drop fixed.
*Two Separately Placed Boosts - put a few or all your pedals in the loop and use it like two separate boost pedals/choose the location of both boosts.
*Module Hugger - use modules like the Mellowtone Fat Sound in the loop. Turn your Hugger into whatever type of module you put in the loop. Or stack several in different orders to create new effect textures.
:Specifications:
*Rugged Aluminum Enclosure
*Three Bright White LED's
*9v Adapter Power (no batteries, it's better for the environment!)
*Finish - smooth gloss top/satin brushed sides
*Professionally Printed Circuit Board
*Created and Built by Fuzzhugger in the U.S. / Boost circuit developed by Mellowtone
*5 Year Warranty