Attention all you wicked visionaries, audio madmen, and fiendish tone hounds. Looking for a way to bring about all those sick and twisted sounds that hide inside the dark corners of your mind? Let us introduce you to Electro Faustus, a group of gifted madmen with a knack for designing some strangely beautiful and off-the-wall musical gadgets. Let's face it, in all of us there lives that hunger to create something unique and different. It's those odd little undertones that we incorporate into our music that gives our sound that something special. Sometimes we may shy away from noise boxes, oscillators, and other strange gizmos simply because they can be a pain to dial in or operate. The cats at Electro Faustus have put an end to this annoying ritual by coming up with a collection of straight forward, easy to use gear that not only sounds great, but covers a wide range of tonal possibilities. As a fan of cats like Zappa, Naked City, Fantomas, Pink Floyd, and Hawkwind, I found this gear to be quite exciting and dead on the road to psychedelic heaven. We will be taking a look at all of the Electro Faustus gear one gadget at a time, exploring their possibilities, and taking things to the next level. Let's proceed on this journey shall we? 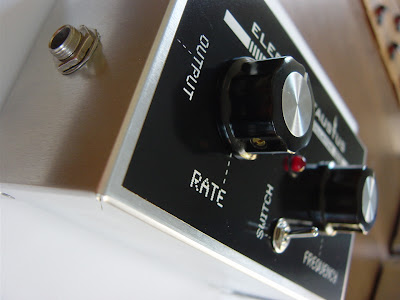 For more info on Electro Faustus go to www.electrofaustus.com or click the direct link in our sidebar. We will be looking at more of this wonderful gear in the near future so make sure to keep your eyes peeled. We'll be back soon with some more EF fun.
Posted by Alfie Cruz at 8:00 AM