J.S. Moore Pickups, the answer for anyone looking for a set of killer custom handwound guitar pickups. Need buckers? No problem. A set of Tele or Strat pups? You got it. How about some P90's? Coming right up. What about mini-buckers?.... you get the picture. Jon Moore the mastermind and man in charge at J.S. Moore Pickups has one thing on mind, to build you the best possible set of pickups man can offer. I had a chance to not one, but three different sets of Jon's pickups, and I have to tell you each model blew my mind! The keen ear for good tone Jon has is something that comes across clearly through each of his pickups. I wanted you guys to some really cool gear to check out this month so that going into the new year you would be armed and ready for the masses. J.S. Moore Pickups are a great place to start and a great way to have your axe sounding it's best. The quality, look, build, and sound of these pickups all lead up to one place... the road to great sounding music. 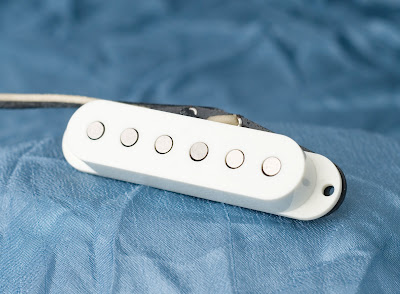 In the last couple years since I've taken up the job to do my own guitar mods the one area I can never get bored of experimenting with is pickup swapping. The reason for this new found love is pickup builders like Jonathan Moore. The passion and hard work that goes into building a pickup like this can really be heard instantly, and will do for your overall tone what you wouldn't imagine. I put the set of Monterey pickup into my guitar players Strat without telling him and it didn't take 2 minutes for him to figure out that I had done something to his guitar, he was absolutely stoked. In fact now that I think about it those pickups are still in his guitar! We did some serious demoing of these pickups and put them through just about every amp, pedal, and setting we could manage. I wanted to go for a straight-up dirty blues tone first so I setup a Tubescreamer through a Blackface (Twin Rev) and got to stepping. I plugged into the Twin's Normal channel, set it Bright, and rolled every knob to 7. The amp was pretty loud, at the point just where the speakers start to hand you grit'n'rumble. The first thing that stood out to me about these pickups was how accurate the picking response was, every chuck, strum, dig, and brush of my guitar pick came through evenly and balanced. All of the natural woody tone from the guitar came through much clearer and stronger. There's nothing more I love than a set of pickups that can bring out your guitar's acoustical sound. The overdrive I was getting from just the amp and Monterey's was smokin! To clean up the tone 100% all I had to do was roll the guitar's volume knob back about 3-4 clicks, I did this and didn't loose any of the Monterey's character nor did any of the amp's size change. Next I threw in the TS-808 set straight up the middle, and next thing you know a mountain of rich'n'thick grit came screaming out from my amp, a sound Stevie Ray would've been proud to rock out to. Each string growled evenly and beautifully, the low strings delivered a world of tight lows and mid-range honk, and the high strings sounded off glassy and piano-like. I stacked the TS-808 with a distortion pedal to see how well the pickups would handle higher distortion levels, and just like I imagined they would they came through like champs. My lead runs were smooth yet aggressive, picking was bright'n'balanced, and both simple and complex chords came through strong'n'clear. With the Monterey's you get all of the punch, bounce, and pop you would expect from a great set of Strat pickups. Before swapping in the J.S. Moore's the guitar's tone was much darker and a bit dull to be quite honest, definitely no match for these pro quality, custom wound monsters. We figured Jon named these pickups Monterey's for a good reason, so we busted out the Super Lead, my wah, and one of my favorite fuzz boxes. I set the Marshall's tone pretty strong, having it deliver a tight, warm tube overdrive, and used the fuzz box to drive it into madness. Without the fuzz the pickups latched on the amp's tone perfectly, giving me a pure 100% authentic classic rock tone. I could hear the likes of Zeppelin, Sabbath, The Who, Deep Purple, Santana, and the man himself Jimi coming through clearly from my amp. I was able to get and control all the sustain I wanted, and create a mountain of feedback so evil it was scary! I didn't think the sound would get any better and then I added in the wah and fuzz pedal. The pickups howled, wailed, and soared the air like a wicked ball of energy and vibration. Every push of the tremolo bar was razor sharp, and each dive bomb felt like it gulped the air around down with it. We got so excited while demoing these pickups that it ended up turning into a jam session. I jumped on the drums, yes I play the drums too, and my buddy turned up the guitar. We got lost in a psychedelic trip of wild noise and splendid melodies. What else can I say about these bad boys? The Monterey's combined with the new pots and rewire job I did on my buddy's guitar was like plugging into a new guitar, a new guitar with the voice of a vintage favorite. Now to try and get those pickups back from my buddy!
______________________________________ 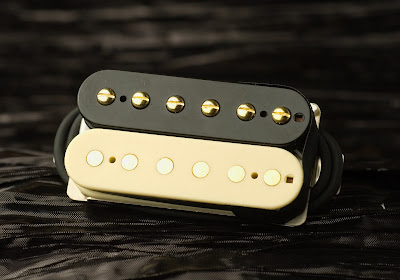