If you've ever had the pleasure of plugging into a Fuchs amplifier you know just how much attention to detail goes into their sound, build, and design. Of gear that has landed on our doorsteps in the last decade or so I can honestly say the Fuchs Audio Tech is amongst the top 10 names available today. So who's responsible for this dream-tone building machine? The name's Andy Fuchs, and he ain't no ordinary tone chasing freak. This man is a true artist of the game, an audio archeologist, and a tone architect of our time. Andy's ability to design gear capable of reproducing yesterday's golden tones is mind-blowing! Within the Fuchs line you will also find a handful of gear with Andy's own touch, gear that many of today's heavyweight's choose to use in their setups. When I first discovered the Fuchs name I remember saying to myself "If only these cats had their own pedals..." So when the Plush FX line came rolling out of the gate a few years back you can only imagine how stoked I must have been. Just like the Fuchs amplifiers every pedal that comes from the Plush FX line is outstanding. All pedals are built from the highest quality components, and are capable of an array if tones that will keep you busy busy busy. We're gonna be taking a look at two of AWC's favorite Plush FX pedals, the Extreme Cream overdrive, and Good Verbrations reverb unit. If you guys aren't up on these killer pedals this is a great place to start. Dig it!
---------------------------------------------------- 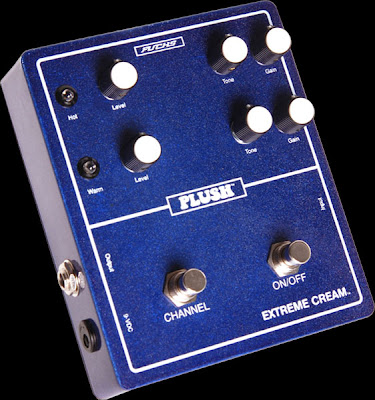