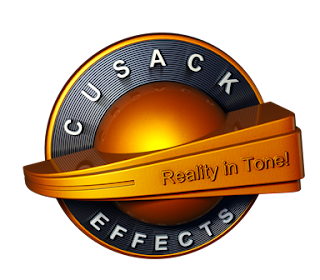 There's creativity, and then there's Cusack Effects pedals. Since day one I have been a huge fan of these innovative stompbox designs. These are pedals that ooze with originality, superb sound, and one of a kind style. If there exists a perfectionist out there in the pedal building game I'd have to give that title to Jon Cusack. The coming of the Tap-A line was like nothing else before it. I can remember feeling like a first grader in an amusement park the first time I plugged into one of these pedals. All of the colors, buttons, and shiny lights drew me in like a mad sonic piped piper. Usually I am not a fan of multi-switch/multi-button stompboxes, but here was something different. Unlike the hundreds of gimmick driven pedals floating around today (EHX uhhhm uhhhm!), here was something different. These pedals made sense me, sounded great, and the quality of them is tip-top. From the simplest to the most complex creations, Cusack has proven time and time again that their pedals can stand up in just about any application. 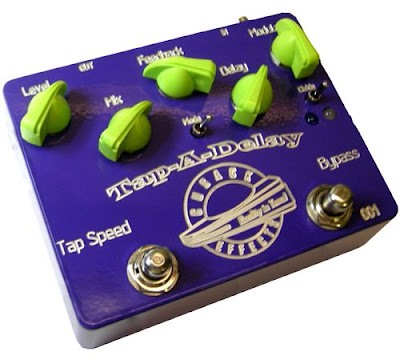 Tap-A-Delay
Controls/Features
(For more info on the Tap-A-Delay control layout click HERE)
------------------------------------------------------------------------------
The Tap-a-Delay - Where the hell do I start!? This pedal very quickly introduced me to an entirely new level of on-the-fly delay control. As a standard use delay box this pedal is aces, but digging into it's features is where I quickly learned more than a thing or two. I began slowly, using this pedal as a simple every day ol' delay box. I dialed in a handful of quick delay sounds to get an idea of the pedal's sound and to see how it would get along with my amp's tone. Instantly I was impressed by the pedal's buttery smooth sound, and it wasn't until I read the manual that I even learned it was a digital delay. Unlike many digi-delays, the Tap-a-Delay beams with warmth and lush mojo. This gave the repeats a velvety tone that sat nicely within the mix and accented my every move. I first played this pedal through my buddy's vintage Twin Reverb - This amp would give me the perfect crisp and clear clean tone for hearing and feeling every nuance and tickle that this pedal had to give. I first set the Tap-a-Delay to some quick slapback delay sounds, using my customized Tele as the first guitar choice. Riffing up and down the neck I was able to create smooth and clear-cut echoes that came and went with perfect attack. I'll tell you this much, my so-so country licks never sounded so damn good. With the pedal's mix control I was able to blend in as little or as much of the delayed signal as I wanted, which came in handy for taming or creating extreme echoing effects. Next I experimented with longer delay sounds and switched to the modulation control's subtle setting. The result was a mellow chorusing effect that sat perfectly next to the delay sound. This setting worked out very nicely for adding some character and size to my chords and licks, and for filling in dead space. I continued to work my way through the modulation control listening to every setting and possibility. By the time I was done I had a world of sane and insane chorusing delay sounds. I'll tell you this much - you won't get bored hunting down sounds from this pedal. All in all I heard no change in my amp's root tone, not in the output level nor in the actual tone itself. I continued spreading out the delay time for longer and more complex delay sounds. For those of you delay scientist freaks this pedal works like a charm. There are so many ways to use this pedal within your playing that you can easily get lost inside of it's every echoes. The tap tempo switch I found to be very accurate and easy to use. Stepping on it I didn't feel any hesitation or ruff clicks. Throwing in on the pedal's divide control I was able to tap in just about any delay sound I could imagine. Again I found a level of control in this pedal that blew me away with excitement. But the ultimate cool feature on this pedal, at least my personal favorite, was the breaking option. By holding down on the tap tempo switch I was able to slow the delay time into strange and wonderful sound effects. Here is where the Tap-a-Delay's mode switch comes into play. With this switch you get three options; Stay/Snap/or Drift. In the Stay position the delay either slows down or speeds up with every hold and release. Letting go of the switch will leave you in whichever delay time you end up at. Very cool right!? The Snap position (my favorite) slows down or speeds up, depending on how you have it set, and letting go returns to the original delay time. Then last but not least there is the Drift mode. Here the delay time slows or speeds up and slowly drifts back to your original delay time once you let go of the switch. To change the break effect all you have to do is hold down both the bypass and tap switches, giving either falling or climbing delay effects. With the breaking effect I was able to create some maddening sound effect. All it took was one part fuzz box, one part imagination, and the Tap-a-Delay. The result was swishing, whirling, winding, slow motion, growling, haunting, bending, (you get the idea), delay sounds that left me with a huge smile on my face. But wait, there's more! Inside the pedal I found a nice little trimmer for darkening or brightening the delays repeats. This little trimmer came in handy for matching the pedal's sound to different amps, pickups, and styles. The super cool thing about this pedal is that it works for all types of players. If you're into simple straight to the point delay sounds this pedal is it. And if you're like me and enjoy finding strange new ways to create sounds, the Tap-A-Delay has all the tools. Jon Cusack has once again out done himself. I can honestly see no way for him to top this one. When all is said and done, this pedal kicks much ass. End of discussion! 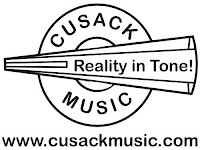 For more info on this and the rest of the Tap-A line, go to www.cusackmusic.com or click the direct link in our sidebar. There is a ton of killer info on these pedals and a wide flavor of insanely cool sounding stompboxes. AWC will be continuing on down the Cusack line so make sure to stay tuned.
Posted by Alfie Cruz at 3:31 AM