Have much fear - Tonebutcher is here 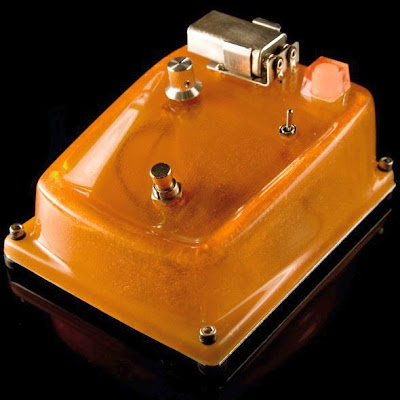 Bronx Cheer
dynamic fuzz
----------------------------------------------------------------------
I must say it has been an honor to have come across such a cool and creative stompbox company. Each and every Tonebutcher pedal that I have had the chance to try has been nothing short of amazing! In each one of these boxes I have found the ultimate in excitement and madness. Besides the crazy cool sounds that this particular Tonebutcher pedal is capable of it also sports the super hip signature Tonebutcher look - A look which by the way reminds me of a tail light on an old Volvo that I once drove. The Bronx Cheer is certainly a dynamic fuzz to say the least, and an effect that will inspire and pull from you tons of wild child riffs. Plugging into this bad boy I found myself drenched in a world of super thick and syrupy fuzz tones. And probably the most impressive thing about the Bronx Cheer is it does what it does with only a couple of controls. On it's face there are only two controls - one controlling the pedal's effect output, and a switch that flips between wild and wilder fuzz sounds. For those of you synth-fuzz loving, extreme rock tone addicts, this pedal will be a dream. A big part of wha this pedal dishes out has to do with what pickups you play it with and how you pluck and pick your guitar's strings.


At first go I thought to myself "How, when, and where will I use this pedal?" The fuzz tones  that were blaring from my amp had me overwhelmed and ready for new heights. I'll say this much, If you stompboxes adventures have only led you to the average everyday ol' fuzz box, you're in for quite a treat. Getting hooked on this pedal is as easy as plugging into a 100 watt monster and strumming away - something that will have you stuck for hours and hours. After cranking both the pedal and the amp I wanted to see what kind of range the Bronx Cheer had - so next came taming this beast. I began by setting the Super Lead clean and serene, and setting the pedal at it's mellowest level. This got me a tight and super focused fuzz tone that rumbled and filled the room with magic. My amp bled out a rhythm tone alien to anything I'd ever heard before. It was still chill enough to sit beautifully in a mix, yet aggressive enough to let cut through beautifully. The Les Paul's smooth sounding humbuckers ended up being a perfect candidate for the Bronx Cheer. Everything from fierce blues tones to slamming alt-rock guitar tones were ripe for the picking. Slowing I began rolling up the pedal's level while still in the mellower toggle switch setting. At mid levels the Bronx Cheer was entire different beast. Here it began dishing out subtle hints of frizzed out/synth-like undertones. The super thick'n'creamy fuzz tone was still there 100%, only now it was chased by a completely new animal. These tones were still very usable for blues licks and rock n'roll of all types. It especially sounded killer being played to dirtier rock flavors, such as garage, punk, and hard rock. Adding in some analog delay or reverb and I had a massive lead tone. Way up on the guitar's neck the pedal's tone stung with chilling wide open harmonics. Last, before going to the pedal heavier toggle switch setting I went ahead and blasted the level knob. Here the Super Lead sang and growled like a mythological ancient Greek beast. The only limits of what could be done were my imagination. Once I got an idea of the first setting's range, I flipped on over to the Bronx Cheer's wild side. I also swapped out the Les Paul for something with single coils - first P90's then a Strat with a set of spectacular handwound 60's spec pickups. My first impression was vintage Japanese fuzz meets classic Arbiter + robotic synth sputter. I don't know about you but I do love me a fuzz box that converts single note hits into huge sounding chords. Playing even the most elementary of single note guitar runs sounded like World War III. I could strike a single note and listen as it warped and transformed into a being of it's own. And still as wild and freaked out sounding as this setting was, it still had the original smooth and articulate fuzz sound that it had at low levels. Like the humbuckers the P90's created a sound all their own, being very punchy and in your face. This sound also ended up working quite nicely through low and med watt amps, and single speaker cabs. Containing and pushing the pedal's sound out through a smaller package seemed to bring out even more oddball harmonics and undertones. Again cranking the pedal and playing way up on the neck made for some interesting effects, and even cooler was dialing in some gritty amp tones then playing the Bronx Cheer through it. My chords all sounded twice as insane and exaggerated, lines and riffs became much more complex, and the simplest of licks sounded enormous. And as I began to delve deeper into the Bronx Cheer's mean side through different amp and guitars, I began to hear possibilities for other instruments, such as bass and keys, and even vocals. On hand I had myself an old Dano bass, a Rhodes keyboard, and a very hip electric mandolin. Each of these gadgets did something different when played through the Bronx Cheer, and all of them being down right awesome. This is something not possible with all fuzz pedal, especially with fuzz pedals that are a bit on the wilder side. Yes it's fine and dandy to own a crazy wild noise machine for experimentation and trickery. But this is only true if you can actually use those sounds. Many of the freakout fuzz machines that exist out there today are only that - noise machines. You get those pedals home and realize they can't be used for anything other than noise. The Tonebutcher Bronx Cheer is the alternative to many of these pedals. Once getting a hold of what this pedal is capable of it makes it almost impossible to walk away from, and mainly because of how usable it actually really is. I found dialing in the sounds I wanted was a cinch, getting completely original fuzz sounds was cake, and getting this pedal to go bananas was a walk in the park. I can only imagine what other strange and beautiful creation Tonebutcher has in store me next. 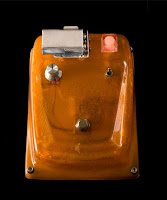 You know where to go for more info on Tonebutcher.... but in case you don't the website is www.tonebutcher.com or click the direct link. You can also check out some video demos on our Youtube Search Engine at the bottom of our site, just type in Tonebutcher and the pedal you're seeking info on. We do have more to come very very soon so please hang tight you stompbox freaks.
Posted by Alfie Cruz at 11:24 PM