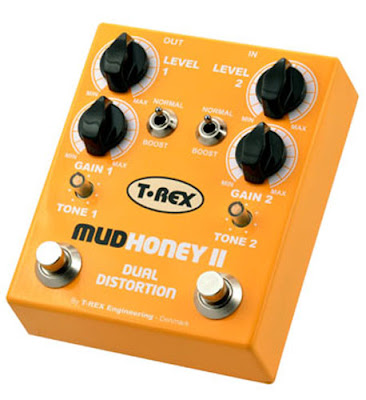 
I'll start with my 15 watt head and neck bucker Tele, which I later used with the Mudhoney II on a small gig and ended up being the perfect little tone machine for knocking out all of my overdrive and distortion textures. Later I would discover this would also be quite an impressive setup for studio and recording sessions. With the amount of range that this pedal's gain and tone controls have to offer, it made it possible to dial in everything I needed. Then add in the pedal's boost function and a little meddling of your guitar's controls - and you got yourself a whole new range of tons to play with! Having the ability to set one of the pedal's channels to a light boosted grit, and the other channel to a hotter drive - really made this one of the most useful dirt pedals. Using the pedal to slam into the tubes I was able to get these traditional punchy clean/dirty AC15 tones with lots of highs and smooth mids. Then once engaging the pedal's second hotter channel I was able to push into more distorted and aggressive rock tones. All without loosing the amp's characteristics and maintaining my root tone feel. I was also easily able to control how and when the tone broke up by the dynamics of my picking and strumming. A light touch would provide a sparkling clean tone with gritty undertones, and digging in would take the amp into a howling growl. With ease I was also able to get back to the amp's clean tone by rolling back on the guitar's volume, all without any coloration or drop in tone. Next I experimented with one channel as a clean booster and the other cranked full blast. Here the pedal created an authentic rich'n'smooth golden rhythms and ruff'n'rugged leads. Most awesome was how each pick would respond. In the Tele's bridge pickup the overdrive signal was able to slice and cut with great definition and spank. Ringing out chords never sounded so beautiful! I got great note separation yet still had plenty of attitude to punch out massive sounding chord work. With the neck humbucking picking it was more of the same. I got all of the same note separation and aggression, only with even more smoothness and low bottom thump. I thought to myself "Here I am not even ankle deep into this pedal and it's already pushing out tons of awesome tones." This was something that the first Mudhoney pedals had, and why so many players love them so. Another amp/guitar combo that works nicely with this pedal was my 4x10 Deville and P90 equipped Junior copy. Here also tried the clean booster channel/fully cranked lead channel thing and it was marvelous! The throaty P90 tone cut through like a deadly samurai sword. It was obviously going to be no problem getting this pedal to adapt to whatever pickup you played it through. I was could take the sparkling Fender clean tone into just about any dirt tone I wanted. Through this amp I also got hear what the Mudhoney II sounded like through super loud levels. If you guys have ever played the Hot Rod amps you know how knarly they can get. And with mine sporting four 100watt ten inch speakers, a revamped tone circuits, and a few other tweaks - it gives it enough clean headroom to spare and makes it the perfect amp for running dirt pedals through. With the amp cranked loud enough and the Mudhoney set just right, I was also able to convert it into a Marshall-like demon. The four 10's sounded like a wall of rock god heaven. This amp is also another piece of gear I use a lot for gigs, and with the Mudhoney II it was really nice. On stage the pedal was able to give me the perfect blend of clean to distortion, and able to provide me with those blaring screeching lead tones. Using this pedal live also gave me the opportunity to stack it up with some other pedals... hehehehe. Just for kicks in the middle of a riffing good break down I decided to stomp on the Mudhoney, while already playing through a blaring smooth fuzz tone. The Mudhoney took the fuzz pedal's grimey sound and twisted it into a mothership of psychedelic harmonics and overtones. Then there was pushing this pedal though an already overdriven signal, which was probably one of my ways to use this pedal. Through both pedal overdrive and amp overdrive the Mudhoney II came through with flying colors. After playing around with the Mudhoney II for a couple days I would safely describe it as a pedal capable of a huge range of dirty tones, a pedal that plays well with other stompboxes, and a pedal that thrives when matched up with tube amps.... and just a kickass pedal PERIOD! 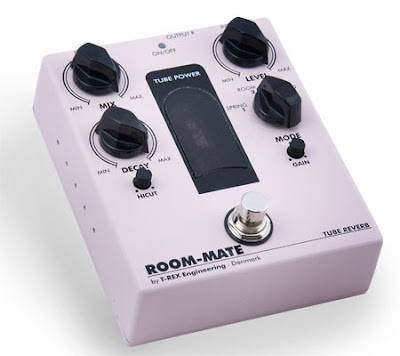 
I'll start with some honest to goodness classic spring reverb tones. For this I plugged into my Super Lead and Telecaster. The big booming sound of the 100 watt Marshall in fact ended up being the perfect canvas for the new Room-Mate's awesome tones. To achieve a vintage voiced spring verb sound was indeed very very easy. I simply set the mode switch to spring, dialed in it's controls to my liking, and that was that. Right there swimming out from my amp was a lush sparkling classic reverb tone that had my guitar sounding pretty damn hip. I had the perfect blend of British attitude and classic American verb, which made for one very cool tone. I slowly went from a clean tone to pushing the amp into a light grit. With the pedal's decay and mix controls I could dial-in just the right amount of effect and feel. It was nice having the ability to have a big decayed reverb only mixed in lightly. This created this strange reverb that sat intensely behind the amp's root tone. Lots and lots of fun. When I first demo'd this pedal I had done it through a Twin Reverb (the king of all reverb amps if you ask me). This would later lead to comparing both of the reverb types. A/B-ing the amp and pedal's reverb tones I must say was quite tuff, and I will have to honest here - I did choose the pedal more times than I did the amp. Later when getting deeper into this pedal I knew exactly why this was - It is the Room-Mate's tone quality. Even at low almost undetectable rverb settings the pedal gives your root tone a little bit of sweetness. This is one of those pedals that holds all of the mojo that makes a great vintage tone great, yet takes this tone into higher grounds. This let me pull surfy psychedelic 60's verb tones and light fluffy whispers, with plenty of warm and definition. All literally a breeze for this pedal. With the pedal's wide range of controls I could pull a bunch of variations on each reverb tone I dialed in. This automatically makes this a killer gigging reverb. Anyone without a on-board reverb would do themselves proper by snatching up one of these pedal's.  Then there was using this pedal as a studio tool (which is where the fun really began). Not everyone can afford expensive rackmount reverb tools or has room for big bulky reverb tank units. This pedal is a perfect alternative to all of this. I'm the type of cat that when recording uses the best tool for the job. Not always what might work best for one application work for another. Sometimes I like to use something flashy, sometimes I use a plug-in, and sometimes I use pedals. With the new Room-Mate I was able to get all types of uses out of it. One of my favorite was using it's room reverb effect in recording sessions and live gigs. With drums and vocals this especially worked best. I was able to give my drum tracks a big, sweet, forgiving room sound that added size and muscle to the overall sound. I recorded these hi-hat/kick/snare tracks with a stereo overhead and mic in the kick, that in the end sounded pretty damn impressive (thanks to my micing techniques and skills, hehehehe). Later when adding the Room-Mate's room reverb things got even sweeter. I was able to hear and feel all of the room's characteristics and sweet acoustics. This possible with both hall and room settings. Adding the pedal's hall reverb also sounded great with fuzz pedals and high gain distortions. I myself really enjoy using an exaggerated hall verb with fuzz for adding spooky and psychedelic layers to tunes. It's a great way to create background noise and make your fuzz notes trail on forever. Then last came the super cool super hip LFO reverb mode. Oh mama! I've heard and played many different takes on this type of reverb before, and thought either they were too much or just not interesting at all. With this pedal it is not like so. The LFO mode really takes your tone and turns it into something wild and special. I was able to get these beautifully aquatic-like reverb/chorus hybrids, then take her all the way up to trippy warbling madness. Again, having the amount of control that that this pedal offers made it a cinch to get tons of different variations. From one end of the reverb spectrum to the other - I was able to cover just about every sound you could imagine. This is one of those pedals that really needs no help in speaking for itself - a pedal that will for sure become a collector's in years to come.