Helping You Get There 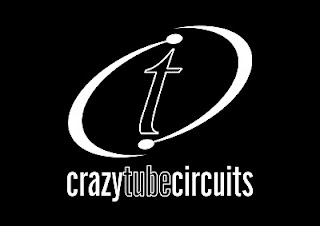 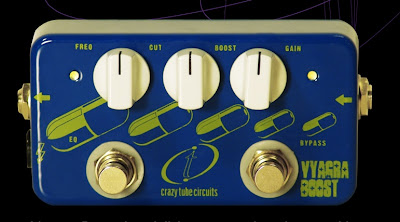 
-------------------------------------------------------------------
Anytime I get a chance to try anything from the Crazy Tube Circuits pedal line, I just know I'm going to be in absolute treat. For those of you hardcore pedal addicted stompbox junkies, these pedals are the ultimate fix. It didn't take me long to become a loyal and dedicated fan once getting a hold of these boxes. Everything from the artwork on these boxes to the dynamite sound that they project is highly attractive. Chris Ntaifotis (mastermind behind CTC) has been able to design his pedals with the perfect balance between vintage vibe and traditionally smooth boutique sound. In all of the CTC pedals I have ever tried I've been able to find spot-on classic tones, as well as characteristics that make them all their own beasts. And speaking of tone beast, this is exactly the perfect way to describe the fury of the Crazy Tube Circuits Vyagra Boost.
The Vyagra Boost's purpose is unlike any other booster you will ever come across. This simple yet extremely effective pedal will most certainly boost your signal into some of the most beautiful and powerful overdriven tones your ears will ever hear. But it is the Vyarga Boost's capability of taking your tone into wild and new horizons that sets it apart from many others. How it does this exactly? We will get to that shortly. This pedal is housed in a heavy duty small footprint enclosure, which makes it great for saving on pedalboard space, and built with only the highest of components. The Vyagra's gain control is capable of a whopping 25db of boost, enough for slamming the front-end of any amp. The freq control works as a parametric eq which lets you dial in a number of different tone characteristics. The cut/boost works inconjunction with the freq control for dialing the eq signal in & out. Last the pedal sports two LED indicators, and two high quality footswitches for true bypass and the for switching in the eq circuit.

Because of the Vyagra Boost's eq section I was able to run it up against every type of pickup and amp imaginable. The sweep of the parametric eq made it possible to fine tune both my clean and dirty tones, and let me convert certain pickup types into completely different animals. The pedal's eq section also made it possible to convert other pedal's into different beast and gave pedals such as modulation and compressors really cool flavors. I started with a duel humbucker equipped semi-hollow guitar and 15 watt tube amp. I set the amp as clean as I could with it's tone control at noon, no verb, and nothing but a pair of high quality cables going to amplifier and guitar. The root tone itself was thick and full of lots of meaty clean harmonics. The Vyagra Boost I set with it's gain control at about 15% power and left the eq circuit out for now. I engaged the pedal and hear the amp go up into an even thicker meatier sound. With the guitar's humbucking pickups I was able to easily get a bit of grit from the signal simply by digging in and striking down on the strings. Chords rang out rich and clear which made the amp sound much more poweful than it actually was. Single notes also had plenty of definition and strength which sounded great with riffs and licks of all sorts. I added in another 10% of the pedal's gain and switched to the neck humbucker. Here the root signal became much thicker and even more grittier depending how I struck the strings. I really liked how transparent the Vyagra's signal was, and how much mileage I could get from it's sound in each gain setting. I switched the pedal in & out to listen for changes in my tone, but there was none. The character of the naked amp was still present, only much more in-your-face. I then dialed the pedal's gain control to give me a medium overdriven signal, something perfect for blues and classic rock. I was actually able to get these great southern rock tones by pushing my amp and using the semi-hollow guitar. All good good stuff. I then took the amp's volume control as loud as it could go, which gave me an organic crunchy tone, and shot it's tone up a bit higher for more sparkle. I then pumped the pedal's gain up to about 50% which pushed the amp into delivering a stunning bedroom/studio level rock tone. The overall sound handed me plenty of everything! Rich harmonics, great overtones, lots of smooth'n'creamy grit, and sweet sweet mojo. Next I took the pedal's gain to full gain, and cranked out an army of different chords. My oh my what a sound that little was able to kick out. I was actually quite taken by how much power the Vyagra had to give. Here is where I began playing with it's eq section. I began by finding the neutral eq frequency, and left the cut/boost control at noon. From here I experimented with shifting from cut to boost. This is where I realized just how many sounds were going to be possible with this pedal. I was able to add weight to my sound or thin it out with just a turn of the cut/boost control. This also let me fine tune my amplifier, which is perfect for those of you who have trouble finding your amp's sweet spot. By cranking the pedal's gain control to the desired spot and setting the eq section just where I wanted it - I was able to get exactly the sounds I was hearing in my head. Next I began playing around with different freq control settings. Very very quickly did things become interesting. To get the sound I wanted form my pickups all I had to do was strum down on a chord and turn the freq control until I found the tone I wanted. Then with the cut or boost I was able to dial in as much or as little of that sound as I wanted. I was able to get cocked wah sounds, treble boost tones, midrange heavy tones, tones that sliced through the air, and just about everything in between all of these. Using this pedal for lead guitar tones was something I found was exceptionally fun. I then plugged the Vyagra Boost into a 100 watt Super Lead and let it fly. I set the amp really loud so it would overdrive into a big natural crunch. Then I stacked the pedal's boost section into it and got an even bigger sound. The Vyagra didn't change the feel of the tone but instead gave it more of what made it sound great. The more of the pedal's gain I pushed into the amp, the more of the amp's mojo I was able to get. Tossing in some of the pedal's parametric eq was also quite delightful. The huge sound of the amp and frequency range of the eq gave me just about every sound I wanted. I could go about playing my amp's natural clean or overdriven tone, then with the Vyagra Boost boost that signal and have the eq pre-switched for a maniacal sound that made everything sound wild and crazy. Then there was mixing in different dirt pedals, such as overdrivers, distortions, and fuzz boxes. The Vyagra Boost worked as an external eq control which could convert every one of the dirt pedals into whatever sound I wanted them to be. Overall the Vyagra Booster worked great with other pedals and many many different amps and guitars. This was only a scratching of the surface of what kinds of sounds one can get from this pedal. It you're a tone perfectionist or just love tone weapons with lots of range - this pedal is for you. 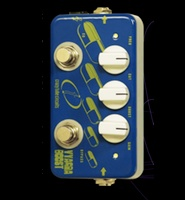 For more info on Crazy Tube Circuits go to www.crazytubecircuits.com or click the direct links in our sidebar. Make sure to check back in with us for more awesome CTC features coming very soon! Also make sure to check out our review of the CTC Ziggy overdrive pedal. Just type out Ziggy Overdrive in our search engine.
Posted by Alfie Cruz at 3:27 PM