Somewhere Over, Above, and Beyond the Rainbow...

Yes the this site is called "Analog" War Cry, and yes we do focus on a lot of the amazing analog devices that surround us daily. This does not mean we aren't keen on or hip to many of the cool digital gadgets that are out there also making our tonal journey a dream and delight. I am not one of these analog nazis that only swears by analog gear, tube amps, and vintage gear. If it sounds good to my ears I let it into my circle of creativity. For those of you who have been following our site you may have seen our piece on the Electro Faustus EF101 Duel Oscillator, a sweet little gadget with a ton of possibilities. Electro Faustus has graced our ears with another of their slickly designed digital boxes of fun. This time we'll be entering the world of the theremin, an old but wonderful simple instrument. Electro Faustus has now brought us a new way to look at and experience this killer colorful tone tool. For those of you looking for some new weapons to throw into your arsenal, pay attention! 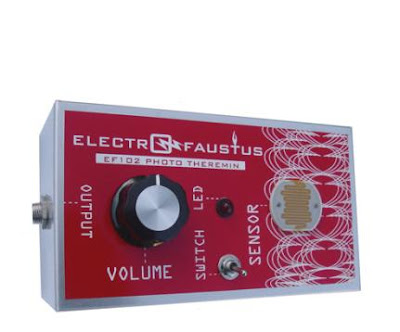 I don't know about ya'll, but I've had the pleasure of messing around with some of the coolest theremins out there. The theremin is an instrument that can take you just about anywhere! Throw some other effects into your signal and you have a world of colors to play with. The EF102 has made playing the theremin easier than ever, has made this instrument road friendly, and it won't cost you an arm and a leg. The EF102 Photo Theremin consists of a light sensitive photocell that is controlled by blocking or letting in light to make it shift in pitch. The EF102 is capable of giving you some of the trippiest sound effects you will ever hear, hands down. Stack it up with some analog or digital delay and you're in psychedelia heaven! The EF102 is a very simple unit to use, it's very versatile, and it won't dent your pocket book something ugly. With all of the gimmick boxes out there today this little theremin is a breath of fresh air. Setting up and using this box is extremely easy, leaving more room for more creating and experimenting.
The last time I did an Electro Faustus feature I had an absolute blast! It was hands down one of the funnest gear demos I have ever rocked out on. Well, they've done it again!!! The EF102 has to be one of the coolest inventions to hit the market in a long long time. I found myself a slave to this box, hunched over and creating tons and tons of different sounds for hours and hours. All in all the EF102 was capable of many cool things and it worked quite well when introduced toother effects. The first thing I wanted to do was directly plug the EF102 into a nice sounding amplifier to get it's purest uncut sound. My choice of amp for the first wrangling with this box was my modified 4x10 Deville. This amp was perfect for setting up a sparkling clean tone to be manipulated. I carefully set the amp's volume, then set the tone knobs directly at noon, with the reverb at about 2-3. I turned the Ef102 on and WOOOOSH! A wall of wailing and howling came flying from my speakers. I waved my hand over the photocell eye and got exactly what I expected.... kickass bending/pitch shifting. The sound of this unit is really defined and clear but not super duper square waved like most digital units. The notes shift really smoothly and have zero kinks in them. Like a traditional theremin you can do all the pitch shifting you want, from low bellows to high squeaks. In fact I was really impressed at just how far the notes can climb and dive bomb. What this box does not offer is the vibrato that you can get from your second hand on a traditional theremin. But this is not a problem, cause I found a way to take care of that. Like I said, these Electro Faustus units get me thinking like no other. Here is what I did. I have this really cool ring mod pedal that sports an expression pedal input. What the expression pedal lets you do on this ring modulator is control the speed of what ever setting you have it set to. The pedal does these killer vibrato/tremolo effects that sounded great with the EF102. With this pedal an the EF102 I was able to do everything that a traditional theremin can do. With my hand I did all the pitch shifting and with my foot all of the vibrato. Pretty cool huh? Next I cranked the amp's reverb for some more dramatic spacey sounds. With a volume pedal I could create these weird long trailing beeps and squaks. My mind went racing into thoughts of ark Side of the Moon. Here is where I had to throw a delay pedal into the mix, first an analog delay, then a nice tight digital one. Both analog delay and digital worked wonders with the EF102 and brought me a new world of oddball shapes and sounds. The analog delay blended with the Ef102 to create a warmer, buttery sound effect, while the digi delay created some sharp in your face echoes. Adding in the magic of the volume pedal created some insanely cool swells and spaceship effects. If ever you've played with an analog delay's time control while a sound is going through it you know how awesome that can sound. With the EF102 theremin this is even cooler! I was able to create an endless amount of soundscapes and ambient noise by feeding the delay the theremin's sound and letting the delay pedal warp and mold it into mad world of psychedelic creativity. I'm telling you, the possibilities are endless. If your mind can dream it up I'm sure this little box can deliver. Electro Faustus has really perfected their skills at delivering affordable and great sounding products. I cannot say enough positive things about the EF102. If you're looking for something to shoot you into another level of creativity this is the route to go. The quality in the Ef102's sound is top notch, it's size makes it a perfect gigging companion, and delivery is second to none. I give these cats two thumbs up once again and hope ya'll take the time to check out their cool collection of tone tools. 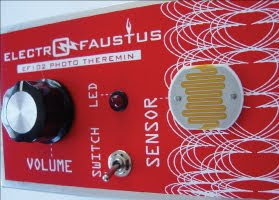 For more info on Electro Faustus go to www.electrofaustus.com
We will be bringing more on this super hip company very shortly so make sure to stay tuned!
Posted by Alfie Cruz at 7:40 PM