Guitars, Pickups, and Pedals oh my!!!

When I started Analog War Cry my goal was to hunt down as much unique and innovative gear as humanly possible. The last couple years have not only been extremely educational, but they have shown me a vast evolution in musical gear, instruments, and how we go about achieving our sounds. Many of the companies stepping up to the plate and taking it to the next level are smaller independent businesses, sometimes even one-man operations working out of their living rooms and garages. I would say I've been around long enough to know a great piece of gear when I see one. I have also been told I have quite a talented eye and ear for spotting out unique sounding gear. One of the companies in the last couple years that has been swimming in my ears and eyes is a small outfit by the name of Harden Engineering, run by the talented Bill Harden. Now, if you've heard of this badass little company you know the slick and hip work they do. This is one small company that has truly floored me and shown the brilliance of creativity that lives within the gear building world. Bill's talents take him to designing some of the most amazing guitars, pickups, and pedals to ever see light. Oh what I wouldn't do for one of Bill's super hip looking guitars! Until that day comes I will rock one of his awesome pedals. 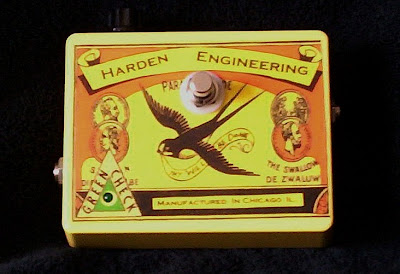 Something tells me this Bill Harden character sports a healthy collection of body ink (tattoos). At least this is what the Swallow Overdrive instantly reminded me of. I guess us tattoo sporting hounds just know our own. Anyhow, again I have been blessed with a simple and great sounding pedal design. For me it is always "The simpler - The better." This is one of those overdrive pedals that works great through both dirty and clean tones, can turn any amp into a rich'n'warm dirt machine, and a pedal that will add some hip flavor to any pedalboard. The Swallow's controls are quite simple, boost/level control, and on/off switch. The character in this pedal's overdrive goes from a crunchy, throaty howl, to an all-out jaw dropping grime. Incorporating your guitar's volume and tone controls are great tools to use with this pedal, and it also plays well with others. Bill constructed this pedal from top notch components and parts, with true bypass switching, and an art layout that is too cool for school. The Swallow is assembled 100% by hand here in the good ol' USA. In our little studio the Swallow has been an instant hit with many of the bands that come through to record. It has also been one of my personal favorite gigging tools.

I ran the Swallow through two of our favorites, my AC 15 clone, and a Twin Reverb. Luckily we were also able to run the Swallow through a couple of other amps which were on loan to us for a recording session. These amps being a Matchless DC-30, 65' Deluxe Reverb, and a sweet sounding Bogner Shiva courtesy of a famous musician buddy which I will not name. The plan was simple, we wanted to run the pedal through as many different tones as possible, through as many guitars as possible. We will share with ya'll some of our favorites. I'll start with the neck bucker custom built Tele and Twin Reverb blend. When it comes to Blackface style amps it's simple, I just flip the knobs to 7, with the verb at around 2-3. The Tele and amp created what you would imagine to be the sweetest and warmest damn clean tone you've ever heard. I started with the Swallow's Drive knob at it's lowest and moved up to full blast. At mellow Drive levels the pedal delivered a nice semi-clean/crispy tone. The pedal's grit responded to my pick attack beautifully and taking the tone into a fully clean tone was easily done by rolling back a hint of my guitar's volume knob. Taking the pedal into it's medium range grit was probably my most favorite. Playing the Tele through it's neck humbucker with the tone knob slightly rolled off did me wonders. The bright/sweet sound of the amp, thick character of the Seth Lover bucker, and kickass tone of the Swallow worked together to create some of the illest vintage dirt tones. With the bride pickup I got some great blues tones, and baddest alt-rock sounds. Another combo which stood out was the DC-30 and my single P90 equipped Junior copy. I ran the Matchless to a medium overdrive and rolled the Junior's tone knob close to zero. The aggressive tone of the P90, natural grit from the amp, and Swallow did wonders! Finding the pedal's sweet spot was damn easy. I simply strummed a handful of mean sounding 5 chords while my partner rolled the pedal's knob back and fourth. Through overdriven amps I found the pedal worked best with it's Drive set at about 75%. I was able to get the smoothest lead tones, and able to work some rhythm tones by shaving off a bit of the guitar's volume. One of the ultimate tones though was playing this baby through some low watt amps and duel humbucker guitars. I rocked the Swallow through a 15 watter, 7 watter, and 5 watter. Through all of these amps I got the most gigantic sounding rock tones. Cranking these amps and introducing the pedal's grit into the signal did things to the overdrive sound that The Who would be proud of. I also dug the sound that my partner's Jazzmaster created when he set both the pedal and amps to low crunch. He dug into the guitar's strings like a madman and pulled what were some insanely cool overdrive/distortion tones. I was reminded of a Television, Sonic Youth type tone. It was actually pretty dam impressive just how many tones this pedal was capable of being that it only sported one knob. I also found the Swallow to work really well with other pedals, such as clean boosters, overdrives, distortion, fuzz, etc... Setting the Swallow straight up the middle through the Deluxe Reverb then using a clean booster to further push the signal also sounded spectacular. With some dirt pedals you get a mild to wild hiss when introducing more Db's to the signal. This pedal I am happy to say plays well with others. Last was the Bogner Shiva, and oh baby what a sound that amp and this pedal created. Through the amp's Clean channel the pedal did it's magic and created more stunning grade A dirt tones. The size of the Swallow's tone through a 4x12, with the Shiva booming like a madman was pure freaking rock and roll. The Swallow didn't eat away any of the amp's sweet tone or kill it's EQ (sign of a high quality pedal). Rocking this pedal though the amp's Gain channel was also a real treat. I first dialed in the best sounding overdriven sound I could get from the amp, then blended in the pedal's sound. Again the pedal did not take anything away form the amp's sound, nor did it mask any of it's character. Instead it accented everything that made the amp sound wonderful. The lows were boomier, highs had more jangle, and mids more honk. This pedal proved capable of delivering a handful a great tones, was able to enhance root tones, and blended with many different guitars and pickups to create a just about any dirt tone needed. It is quite clear Bill Harden owns a talent like no other, I can only imagine what his guitars are capable of. If you're on the hunt for something different hit up Harden Engineering.
(Below a handful of different Swallow versions) 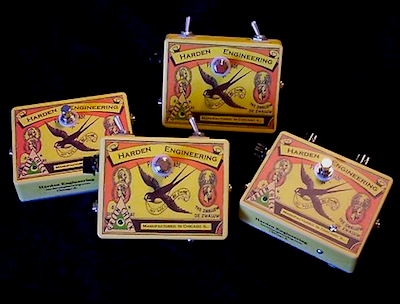