Heh, heh, heh! Everytime I whip out a Way Huge pedal it makes me either smile, crack up, or just plainly want to rock and roll. If there is one big dog doing it and doing it well it is Way Huge Electronics. Every reissue released as of yet has been more than just your ordinary stompbox. This new generation of Way Huge pedals sports stellar tone, originality, killer looks, superb build quality, and a ton of hip mojo. I love it that Jeorge Tripps took the initiative to bring these awesome pedals back to the tone hungry world of pedal junkies.
----------------------------------------------------- 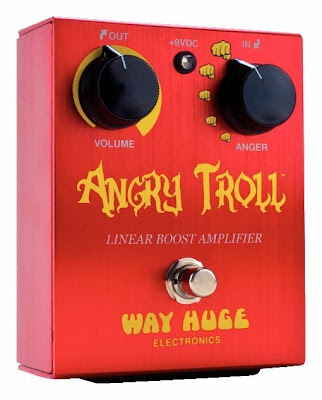 Angry Troll
Linear Boost Amplifier
Features
Volume: Brings the Pain
Anger: More, More, Lots More, and Much More
Quiet Relay True Bypass Footswitch
Non-Detachable Battery Door (9V)
+9VDC Power Jack w/AC Protection
Bright Blue LED for Blinding Sun or Devilish Dark Stages
Killer Construction
Top Notch Components
-----------------------------------------------------
The beast of all boosters is alive and doing well. It's name is the Angry Troll, and it can be seen lurking and doing it's magic on many a pedalboard. I've said it many times and I'll say it again, "there is nothing more I love than a simple, easy to dial in, killer sounding piece of gear". The Angry Troll rounds up all of these qualities and many many more, making the Angry Troll one animal of a tone machine. Getting great tones out of this pedal couldn't be easier too. The pedal's control layout sports two knobs and a true bypass switch. The volume knob dishes out a mighty meaty healthy dose of powerful boost and tone. The anger knob controls just how aggressive you want the Troll to be. You can easily use this pedal to go from subtle hints of grainy grit to all out massive dirty richness. Other than it's LED and super duper tuff enclosure that's about all there is to the Angry Troll. The rest it handles on the dance floor, mosh pit, stadium, studio, bedroom, or rehearsal spot.
-------------------------------------------------
Putting it to the Test
It was pretty damn clear what this pedal was capable of right from the start. I'll say, getting an amp to growl, snarl, bark, and grunt has never been better. I pushed this pedal's endless amount of boost through a couple different amps, guitars, and blended it with some of my favorite overdrivers, distortions, and fuzz boxes. I found the Angry Troll worked beautifully through every size amplifier. From low itty bitty watt amps, mid level champs, to the booming beasts of this world. Before I started doing some tone experimenting I plugged in and played around with all of the Angry Troll's anger settings. I wanted to get familiar with all of the voicing's and power levels. One thing's for sure, having +50db of gain on tap in a little box can get you quite far.... and boy did it ever! The first amp to feel the Angry Troll's fury was my AC15 based clone. This amp also drops down to 7 watts, which was the first setting I ran it through. I cranked up the 7 watt setting as loud as possible without letting it break-up on it's own. I started with the anger knob at it's lowest setting, and with the volume control cranked pretty strong. First I paired the pedal up with a Les Paul, second a Strat, and last a Junior with a single Lollar P90. Their was most def a difference through all guitars. The Les Paul was able to control and shape the grit beautifully, simply with my pick attack. The Strat dished out a loose'n'spanky semi-clean tone. I was able to reproduce that Hendrix touch of dirt tone perfectly. The Junior's P90 walloped the hell out of the signal and created the perfect balance between the bucker and Strat single coil sound. Another great tone was setting up the amp to 15 watts, then dialing it up to a medium level natural overdrive tone. Through some nice tube amp saturation is where I believe the Angry Troll does it's best work. Matching the pedal's output to the amp and setting the angry fist to it's middle position produces some champion guitar tones. Again the pedal worked it's magic on each guitar, but my absolute favorite sound through this setup was playing slide and lap steel. The sound of the Angry Troll's overdrive being stretched across the fretboard sounded insane! I was able to get this extra creamy woman tone with much more bite and attitude. Then I began to push the pedal's volume and anger control to the limit and found out why the angry switch is called the angry switch. In the pedal largest fist setting the pedal was able to add this fuzzy type character to my signal that gave me an original and extremely unique sound. The more volume I introduced to the signal the more of this killer sound I got. This even worked through clean signal's and slightly clean signal's. I was able to get tones out of my Deville that I had previously hadn't been able to get. For only having two knobs and a footswitch the Angry Troll really is one hell of a versatile little stompbox. This pedal was able to deliver through all types of setups and applications, with both vintage and modern gear, for all kinds of music styles. This means only one thing.... great quality! If you're looking a something other than just a traditional booster this is your box.
----------------------------------------------------------- 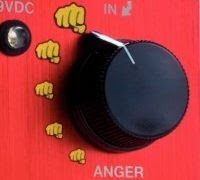 For more info on Way Huge products go to www.jimdunlop.com Make sure to stay tuned for more killer gear, more Way Huge goodness coming your Way!!! May the tone force be with ya'll.
Posted by Alfie Cruz at 7:35 AM