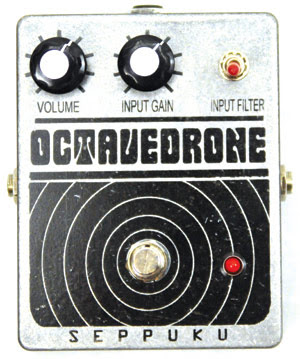 Octave Drone
Octave Fuzz Pedal
* True Bypass Circuit
* Heavy Duty Aluminum Enclosure
* 9V Center - Adapter
* High Quality Parts & Components
* Hand Built in Australia
Controls
* Volume: Controls preamp volume
* Input Gain: Controls effect amount
* Input Filter: Controls frequencies amplified by preamp
(These is the control layout for the first generation Octave Drone which is the model I have and which is pictured above. Newer model is pictured below.)
-----------------------------------------------------
One would think from the sounds capable out of this pedal that the control layout would be much more complex. Rhys somehow figured out how to keep this pedal simple and user friendly, while able to do the magic that it does. On board you find exactly what is needed to get the job done, no more no less. The pair of knobs and single toggle switch of the Octave Drone deliver more variety than I've seen from much more expensive and multi-featured stompboxes. You can always count on me to be a huge fan of cats that know how to keep it simple while at the same time able to dish out tons of tone. The Octave Drone's layout goes like so; Input Filter, Input Gain, and Volume. The Input Filter control on this pedal is really quite special as it is capable of not only giving you control over the frequency flavor but also the effect's size and weight. The possibilities can go anywhere from fizzy, sharp, thin'n'brutal, to wide, gooey, thick'n'creamy. The Input Gain controls the pedal's overall effect amount and aggression. Here you can dial in low-gain gritty fuzz tones all the way to "Time to sell the house because we killed the neighbors with noise." fuzz. The Volume sets your overall output and has enough power to push your amp even further. In both octave settings the Octave Drone is capable of maintaining a tight and focused sounds, or wild and unpredictable madness. Chords, lead runs, double stops, and massive bends all sound fantastic through this pedal. The pedal works well with many different pickups, amp settings, and playing styles. You will find yourself able to pull classic and modern rock vibes from this pedal, and also create wild and furious experimental effects.
As a pedal fiend and gear junky I've always found myself drawn to the mystical sounds of the fuzz effect. Fuzz throughout rock and roll's history has always been able create memorable and timeless music. Fuzz isn't distortion and it isn't overdrive, it lives in a category all it's own while at the same time capable of delivering subtle hints of it's close cousins. I found the Octave Drone to be exactly this type of fuzz, a fuzz sound you can take into a world of it's own while at the same time able to scratch at hints of both distortion and overdrive. It is this type of fuzz box that always pulls the creative side out of us players, and keeps things exciting and fresh. I started the Octave Drone's demo through a JCM 800 Lead Series combo (one of the best amps of all time if I do say so myself) and a self-built 70's spec Stratocaster. I started with the amp's Normal channel with Vol, Treb, and Bass all at noon. The Octave Drone was set with it's Volume unity to the amp's, Input Gain back at 3'0'clock, and in it's Input Filter in the more subtle 1-Octave down setting. Without the pedal engaged the JCM's tone was thick, creamy, and swimming in thumping richness. Blended with the pedal the overall sound became even more splendid! I got a subtle but edgy octave fuzz effect that worked nicely with both rhythm, riffs, and lead work. Most exciting was the ring modulation sounds I got when playing double stops and unison bends. The higher the fret the more intense the ring mod sound became, and the more fuzz added to the signal the more possibility for off-the-wall tones. In lower fuzz settings a nice amount of the clean signal is still present, this makes for a super cool 50/50 (clean/dirty) tone. Rolling up the gain amount made things much heavier and changed the character of the overall sound. The fuzz's behavior also became much more interesting. The Octave Drone's sound swirled and morphed into a bunch of futuristic and psychedelic rock sounds. In it's 1-octave down setting I was able to produce everything from traditional classic rock fuzz tones to sharp'n'violent modern sound effects. Just when I thought things couldn't possibly get better I flipped the Input Filter switch into it's more intense setting and OH MOMMA! This wasn't my first rodeo as far as Rhys's effect pedals go, I knew there was to be more to this badass little box. In this setting the Octave Drone created some of the wildest fuzz tones I'd ever heard. Even at low Input Gain levels I was able to get brutal sounding fuzz tones. The pedal turned chords into thunderous walls of modulated soaked fuzz tones, leads into screeching futuristic howls, and sounds impossible to describe. I found the Octave Drone to be one of the most useful and user friendly extreme fuzz boxes to ever cross my path. This isn't one of those wild fuzz boxes that only produces one usable sound, with the puppy you'll find your sound taking all kinds of killer shapes. It is my mission to try and bring ya'll all the models Seppuku FX releases, and share with you the ins and outs of each pedal. Ever since my discovery of this little pedal company I have been highly impressed by the designs. Seppuku always keeps things exciting and is always willing to push the envelope to the fullest. Make sure to keep your eyes peeled for more from my good brother Rhys.
----------------------------------------------------- 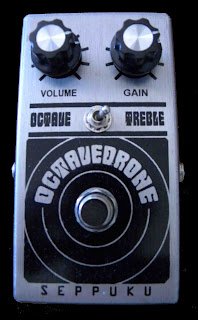 For more info on Seppuku FX go to www.seppukufx.com or click the direct link in our sidebar. I recently discovered a couple new designs from Seppuku FX, the Mind Warp and Repeater. We will try our best to bring you both these pedals. See ya soon!