Next up to bat is new comer Stomp Under Foot, a top quality, hand built effects pedal company with some very interesting little boxes. If you haven't heard of this talented little one-man operation.... well then it's time you did. The designer and builder of the Stomp Under Foot collection is Matt Pasquerella. Like many of the cats out in the stompbox scene Matt also came to be from a love and passion for gear. Today there is so much information one can take from the world wide web that will help them learn how to build and modify musical gear. It is those few heart driven and imaginative builders that end with the talent to create memorable, usable, and great sounding products. Matt most definitely falls into that category of builder, and boy does he have a knack for the fuzz game. Some cats dig the grit, others modulation. Matt? He's all about the fuzz, fizzy, and furry.
---------------------------------------------------
Stomp Under Foot
Massachusetts
Builder: Matt Pasquerella
Years in the Game: 4 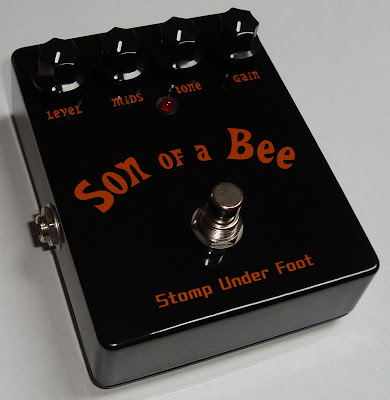