Our Top Finds of 09 continue here with the good people of the Swart Amplifier Co. For those of you who haven't heard of these cats or have not had a chance to take one of there amps for a ride, you are missing out. Michael Swart, the man behind the plan of the Swart Amp Co. has one thing on his mind and one thing only. Great tone, period! My first run-in with one of their wonderful amps was at my local guitar shop (True Tone Music), and I was hooked from the first chord I struck. The attention to detail of these amps inside and out is unlike any other, both the tones they produce and appearance are stunning. There is a retro, furniture-like vibe to the amp's designs that makes them really cool looking. So when I discovered Swart also had a pedal in their line, you can only imagine how stoked I was. The pedal's called the Atomic Boost, and it's the solo soldier of the Swart pedal line. Just like the amps the Atomic Boost also sports a classy and hip look. So what kind of stompbox is it you say? It is of the treble booster species. Imagine the ultimate Dallas Rangemaster and you have the Atomic Boost. With this pedal you get all of the legendary tones that come from the classic treble booster, and none of the flaws. This is hands down one of the best sounding pedals I have ever used.
----------------------------------------------------
Swart Amplifier Co.
Wilmington, NC
Builder: Michael Swart
Years in the Game: Many 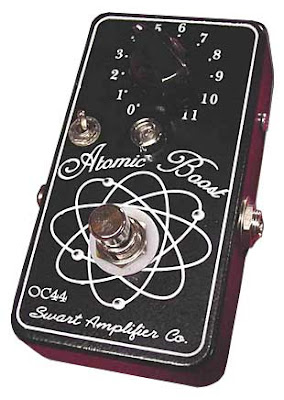 For more info on the Swart Amplifier Company go to www.swartamps.com You will find more killer info on the Atomic Boost along with the collection of amazing amps. We will try and get our hands on one of their amps in the near future so keep your eye for more on this awesome company.
Posted by Alfie Cruz at 12:00 AM