Anyone dedicated to reproducing the legendary gear of guitarist Brian May is ok with us. Everyone knows if there's one sound that has gone down in rock history as one of the greatest guitar tones of all time it's Brian's. It takes no more than a single chord to know you are listening to Brian's magically enormous tone. This warm, harmonically rich, and aggressive sound that was created back in the 1960's is something that many greats since then, along with studio engineers and every day players have been trying to painstakingly achieve. So how does one go about dialing in this sound? Well, before you can get started on your road to Brian May's tone there are a few components you will definitely need in order to be successful. There's the Red Special guitar, a proper AC30, and probably most important is a mighty sounding Treble Booster. This is where Fryer comes into play. Fryer Guitars is the brainchild of Greg Fryer and Nigel Night, two highly passionate cats who have made it their goal to create some of the world's most spot-on Brian May tonal tools. One of the amazing pieces of gear they have decided to take on is a stunning line of Brian May Treble Boosters. I had a chance to put a few of these products through their paces and I must say I am very very impressed. Throughout my many years of playing guitar I have come across many different treble boosting units, from vintage originals to boutique reproductions. These Fryer/ Brian May Treble Boosters really have something going for themselves, something every guitar player will absolutely fall in love with. Let's take a closer look at these bad boys shall we? 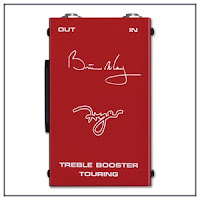 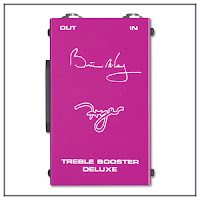 Treble Booster Deluxe
“Powerful, rich, good treble detail”
The Treble Booster Deluxe gives 35dB gain, is tonally placed between the TB Touring and TB Plus and produces richness and punch whilst retaining much defi nition too. This booster has been developed to strongly evoke Brian May’s sound from the mid 1970s Queen albums such as “Sheer Heart Attack” and “A Day At The Races”, as
well as being very similar to Brian’s well known 1980s live concert sound. The TB Deluxe has been the favorite booster choice of our customers when using a speaker attenuator with their Vox AC30 amps. Many customers have also reported that the TB Deluxe works very well with other humbucking and single coil pickup guitars into various types of valve amps. 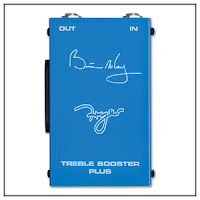 Treble Booster Plus
“Fat, smooth and powerful”
The Treble Booster Plus gives 36dB gain and is the fattest and most powerful of our treble boosters. It is designed to evoke the rich powerful vocal-like tones of Brian May’s recorded sound from the late 1970s Queen albums “News Of The World” and “Jazz”. On the frequency response graph, the TB Plus shapes its boosted frequencies more towards mid range territory than the other boosters, with its peak at approx 2.5K Hz and its top end smoothed off more than the TB Deluxe or TB Touring pedals. For non-BM use, several of our customers have told us they like the TB Plus for producing fat overdriven rock sounds when using humbucking pickup guitars into bright sounding 6L6 or EL34 valve amps. The TB Plus is also very useful for adding punch and
richness to single coil pickup guitars. 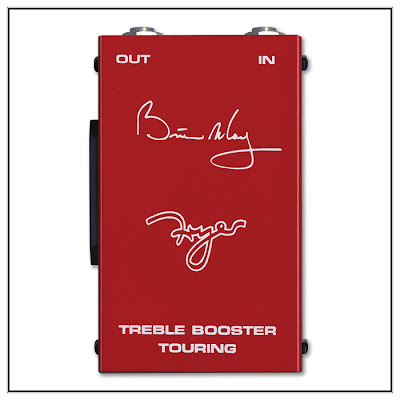 For more info on Fryer Guitars products go to www.fryerguitars.com or click the direct link in our sidebar. Also remember to keep an eye out for more features from Fryer in the near future. We're all about supporting the cause and ready to use their weapons for the fight. Dig it!
Posted by Alfie Cruz at 7:05 AM