The Analog War Cry laboratory is stoked to have one of our all time favorites back in the scene. Moody Sounds!!! Those of you who have been with from the beginning I'm sure had the chance to check out our Moody Sounds Mushroom Echo article (April, 30 2009). If you didn't I highly suggest you read it and come back once you're done. Once again our good friends from overseas have blessed us with another spectacular pedal, only this time in a DIY kit format. In just the few years that Moody Sounds has been around they've quickly become a well known and popular name, and for good reason too. The quality and sound that Moody Sounds has created is one that has become a favorite amongst the tone chasing community, gigging world, studio rats, and experimental freaks. Moody Sounds consists of a stunning collection of cool sounding effects, gadgets, and kits. A collection cool enough to keep any effect geek busy for years and years.
---------------------------------------------------- 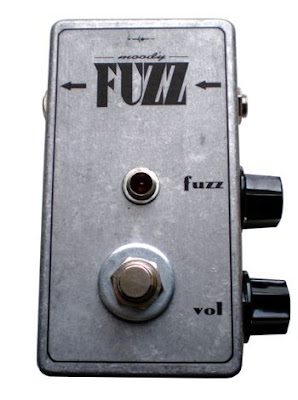 The
Moody Fuzz Kit
----------------------------------------------------
DIY kits are always a blast to dig into. They teach you patience, give those of you who want to learn the game experience, and in the end you have the pleasure of playing and plugging into a piece of gear that has been built by you. The Moody Sounds Fuzz Kit was not only a blast to play and build, it also sounds as good if not better than some of the product line fuzz boxes I have had the chance to try. The Moody Fuzz Kit comes with hordes of high quality, great sounding, and long lasting parts. Included in the kit are also extra components for fooling with different tones and shaping your kit to your needs. Moody also provides you with some cool mods on their website for taking your Fuzz Kit to the next level. On board the pedal you will find a fuzz control, a volume control, LED, and in & out jacks. Simple and straight to the point (just how I like it). In the end you get a killer sounding boutique fuzz box that can be gigged, played, used and abused. In the end that is what's important right? When I'm working up a sweat rocking out on stage there's only one thing I want.... and that is for my gadgets to do their job. This is where a pedal like the Moody Fuzz Kit comes in and does the job magnificently.

Once my kit was put together I went ahead and threw it in line with all the rest of my gigging pedals, my favorite amp, and played with just about every guitar I could get my hands on. The one thing that struck me from the get-go was how much range and versatility the fuzz control owned. Rolled way back the Fuzz Kit was able to produce great sounding crunchy overdrive tones. The sounds reminded me of those first super old school vintage fuzz pedals from days ago. Way down low I also noticed the fuzz control dished out plenty of attitude. Through a couple of vintage voiced humbuckers the pedal was able to deliver a bunch of control and bite when needed. A touch of my pick would push out these great sounding semi-clean dirt sounds. The harder my pick hit the strings, the more dirt the pedal pumped out. This I first did with a clean amp tone, through a 22-watt 65' Deluxe Reverb. Right at around 50% is where the Fuzz Kit started to really break-up and deliver fuzz tone madness. The pedal's sound adapted to the amp's clean tone beautifully, and the two sounds together worked to create a huge sound. Keeping the amp's tone squeaky clean I went ahead and rolled the pedal's fuzz control up to full blast. The sound that came out of that little amp was stupendous!! The pedal gave me a spot-on, proper vintage fuzz tone that worked great with lead work, blues, classic rock, riffing, and thick'n'chunky rhythms. Then I helped the sound blow up even bigger by rolling up some of the pedal's volume control, this pushing the little amp's tubes into a smooth'n'creamy natural overdrive. I will tell you right now; That pedal through that little amp in the right room, with the right mic on it sounded as big as any 100 watt monster. Things got even better once I started pushing the amp itself into some natural tube grit. Instead of pushing the fuzz tone through a clean tone, I now pushed the pedal's sound through an overdriven root tone. The two sounds again worked beautifully together. With both the amp and pedal dishing out small amounts of grit I was able to get a warm and full light overdrive tone with lots of rumble and lots of spank. I was now also playing the pedal with a Strat which helped add more bite and midrange honk. One of my all time favorite setting with this pedal was using it through a med overdrive tone, with it's fuzz at about 20%, and it volume up almost at 100%. The pedal's output and light fuzz combined with the amp's medium overdrive ended up being one fine trio. It created the type of tone that flew out of the amp and smacked dead center in the chest. A perfect tone for stacking up guitars parts. Once I had more than enough killer sounding tones from the little amp I went ahead and switched to something with more power. The choice? A 60 watt 4x10 Deville. I wanted to see if the tones I was getting from the little amp could be reproduced in louder doses. I started out pretty much the same, with the Deville pushing out a thick and powerful clean tone. The Fuzz Kit's volume matched up with to unity, with the fuzz control up at around 15%. I struck down on some big complex chords at heard the same smooth rumbling good gritty overdrive tone come booming from the speakers. My touch was projected really nicely, giving me room to play with the tone. Next I cranked the fuzz up to half way and pushed the volume knob up a tiny bit more. Everything that sounded great in the last setting grew and became more focused. There was a bit more sustain, a hint more compression, and healthy serving of classic sounding fuzz. This sound I was easily able to tame by rolling down my guitar's volume control. The Fuzz Kit also responded nicely to the guitar's tone knob, giving me a handful of great variations of the same tone. Next I slammed everything to 100% (minus the amp of course). Here things got pretty damn loud. In fact, I was surprised just how loud this pedal could get. The sound I got was all pedal and no amp grit. The 100 watt speakers in my Deville produce a giant amount of headroom which is great for getting the most out of your pedals. Before shutting down I did break out an absolute beast of an amp. Here I pushed the Fuzz Kit through a 4x12 cab loaded with Greenbacks, the head being a borrowed Bogner Uberschall. Man oh man, the sounds we got that night. The Moody Fuzz Kit is definitely not a one horse pony, and neither is it discriminating towards different amp setups. I dialed in some of THE meanest guitar tones known to man, then pushing those tones with the pedal. Only to get even better sounding tone in the end. The Moody Fuzz Kit when producing all of the dirt works as a great solution for turning your clean amp into a proper wall of fuzz and attitude. The pedal can hit you with anything from subtle gritty sounds to all out frizzy/crunchy madness. When combined with overdriven tones this pedal works almost as an enhancer. Giving your existing dirt tones more of the mojo that makes them sound so great. You will find a world of kits out there, some being exact copies of popular pedal, some based around those all-time greats, and some completely original designs. Moody Sounds has definitely captured the best of all these worlds with this kit. You can feel and hear a bit of the classic fuzz boxes of yesteryear, the aggression of a solid sounding modern distortion pedal, and a sound that's all it's own. This is only a inkling of what Moody has to offer too.
-----------------------------------------------------

For more info on Moody Sounds you can go to www.moodysounds.com or click the direct link on our sidebar. We will be bringing you more and more from this awesome company so make sure to check in regularly.
Posted by Alfie Cruz at 8:00 PM