If for some reason you haven't gotten hip to the Mod Kits DIY pedals and amps, I'm happy to be the one who brings you this very cool like no other little company. Perhaps you've been living under a rock? No matter you know now... consider yourself in the cool kids circle. Mod Kits DIY is a fantastic outfit that offers some of the greatest DIY projects available today. For you cats looking to dive into the do-it-yourself arena, Mod Kits has everything from simple to medium difficulty overdrive, distortion, and fuzz box kits - for you kids with a bit more experience looking to up your game there's also octave fuzz pedals, modulation, and time based effects - Then for you experienced builders that have been at it for a while they even have some really cool tube driven pedals, amp kits, and verb tanks. All in all it's a great stop for hunting down your next special tone. Build them, mod them, paint them as you like, and show them off to the world in your next session, gig, or pedalboard setup. Not to mention they make stellar gifts for those buddies and husbands of yours that geek out at the Analog War Cry level. 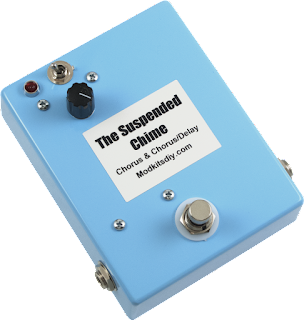 The simplicity and user friendliness of the Suspended Chime was straight forward and easy to maneuver. Along with the footswitch on board the pedal comes with two controls - a selector switch that flips from chorus to chorusing delay, and a blend knob that adds or cuts the intensity of the chorusing effect in both settings. The delay effect is set at 190 milliseconds which works great with an array of different playing styles and sound effects. I found the pedal sounded pretty amazing on it's own through both clean and overdriven amp tones, and also had a good time throwing some other pedals into the mix to achieve some of my favorite effects. I plugged the pedal into a couple different amps and guitars, setting the pedal in it's mellowest to most intense settings.

My self built custom Strat type guitar was first in line. I plugged it into the normal channel of my buddy's 65' Deluxe, set both treble and bass at 7, and worked my way up to full blast on the volume control. I wanted to hear the Suspended Chime through a crisp and clear a tone ass possible, to get an idea of how it affected the overall sound. With the lone chorus setting I was able to dial in everything from hauntingly subtle chorus effects to some crazy cool intense mind whirling chorusing. The sweet spots for me were just outside of noon on the blend knob, from about 10'0'clock to 1. Surprisingly enough the chorus sound was quite warm and very lush to the touch, especially when manipulating my guitar's tone controls and switching into the neck pickups. I picked away and some of my favorite songs and riffs, finding myself warped into the psychedelia of classic rock and grunge songs past. My chord play sounded beautiful! With just a hint of effect the Suspended Chime gave the guitar a hidden shimmer that bloomed just enough to tickle my ear's curiosity. For more of a Leslie effect I set the blend from about 70-100%. I'm a huge fan of volume pedal swells, both with chorus and delay, it gives me some interesting nuances and gives off some great whispering, strange, and tripped out sound effects. This pedal was perfect for experimenting with these types of techniques. Backing off on the guitar's tone, kicking the amp's treble up almost full blast, and keeping the bass at 7 gave me the perfect overall tone to play with. Pushing the amp's tubes into a mild grind also worked well with the pedal's chorusing effects. I'm usually not a big fan of overdrive and chorus but it was hard to ignore that this pedal delivered pretty damn beautifully.

The real magic began once I flipped that little selector switch though. In came the Suspended Chime's delay and it was time to plug in the neck bucker Tele. Something I gotta point out is the quality of this pedal's delay effect. I was really impressed at how crisp and clear, yet warm and lush the delay was. I had a blast just rolling the chorus back and just playing around with the pedal's delay capabilities. Now remember, it is fixed at 190ms but you will be surprised at how much spunk you can get out of this setting. I cranked the Deluxe well into it's overdriven state and spanked away at the guitar neck, holding notes and bending others into my will. The delay delivered and broke in a voodoo like quality that was something really special to listen too. You'd be blown away what a hint of great sounding overdrive, a bit of chorus, and some proper delay will get you! For the ultimate and most exaggerated effects I brought in one of my favorite fuzz pedals. I pushed the overdriven tone into a squealing buzzing growl, clicking in the Suspended Chime's for a badass spaced out rock assault which had my friend jealous he didn't have the guitar in his hands. Again I really dug the delay of this pedal with just a hint of chorus. I'm a sucker for holding a note as long as I can, bending it into bird like squawks, and listening to the sounds distort in collections of rude harmonics. I guess you can tell I had some fun with this little darling, and this is only the tip of the iceberg of what is possible when finding a cool pedal like this.

I'm always excited whenever Mod Kits send us anything from their DIY arsenal. It gives me the opportunity to up my building and soldering skills, schools me further into the world of stompboxes, and in the end hands me something I've built with my own two hands that I can customize any way I see fit. The Suspended Chime I will admit gave me a few head scratching moments, but only because I'd been rusty on my soldering and all around pedal building patience. Once I powered through it though and reached the light at the end of the tunnel, I was granted the gift of something worth writing home about. 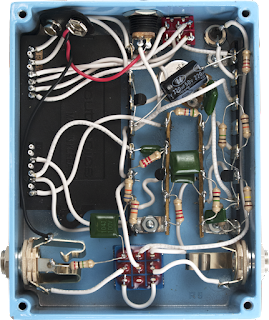 For more info on The Suspended Chime and the rest of the MOD Kits DIY collection go to www.modkitsdiy.com Look out for more from our MOD Kits friends in the near future.
Posted by Alfie Cruz at 1:17 PM