Back in the saddle with another fantastic build from the good people at Heavy Electronics. I tried for quite some time to get in contact with this very busy cool company, and when I finally did connect with them they were kind enough to shoot out a handful of their awesome pedals. We did a write-up on the Red Eyes overdrive which got some great feedback from our loyal and hungry readers. Today I bring you this fine gem from HE, a strange little noise maker that creates some interesting and guitar healthy sounds. More good news is I'll be reviewing a bunch of the Heavy Electronics line-up the next couple weeks. Stay tuned for more from Heavy Electronics... but for now I bring you the Radio Havana! 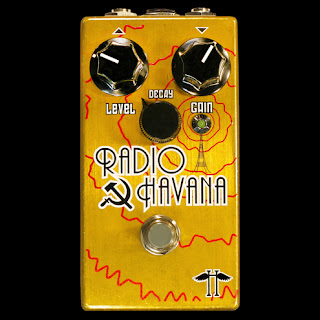 I come across many many different breeds of stompboxes. From the simplest to the most complex, from subtle to the downright extreme. When I first heard of the Radio Havana by Heavy Electronics I was not only curious beyond belief, but a little bit confused as to what the pedal actually did. It is marketed as a lo-fi gritty effect pedal that creates the awesome and strange sounds of old school transistor radios. When it arrived I was like a kid at Christmas time, unboxing it with complete excitement! I quickly learned just how simple this pedal was to use with it's three controls on board, and how much diversity it had. The Level knob works to simply control the pedal's master volume, The Gain knob controls the input amount helping you dial in the amount of grit it produces, and last is the extremely cool Decay knob which introduces a clipping effect the breaks up the overdrive and distortion signal into a collection of really cool tones. My early experiments with the Radio Havana started with a clean tone created by a 4x10 Deville and Tele w/humbucker in the neck. I started with the Decay knob down at it's lowest level and turned on the pedal to see what it could deliver in it's mellower settings. In it's low Decay settings the pedal created some really awesome subtle yet punchy overdrive tones that works perfect for creating those vintage rock treble boost overdrive tones. I guess the pickup has a lot to do with how this pedal works, which is why I used a guitar with both single coil and bucker type pickups. Strangely enough tho the pedal did it's magic through both pickups with absolute ease. The higher I'd push the gain knob the more sweet gritty magic the pedal would create. Honestly with the Radio Havana's level and gain controls alone it was able to create some stellar sounds, enough to keep me satisfied at least, and that's saying a lot. Then I began to introduce the pedal's Decay control slowly into the mix and something even more magical began to happen. Wouldn't you know it they actually created pedal capable of mimicking the break-up and sawdust sounds of an old transistor radio. It's kind of hard to explain if you've never heard an old radio like this, but the best I can describe it is by comparing it to some of the bit crush effect pedals that are out there today, only not as extreme and much more friendly to an overall mix and live setting. As you introduce the pedals Decay control you begin to hear your signal well... decay. It begins to split up and break up in an attractive way that helps your tone achieve something original and memorable. In it's highest settings the effect really begins to disintegrate much quicker making your overall sound something all it's own. I strummed about playing some of my favorite chords jams and was able to hear them in a completely new light. Where I really found my sweet spot tho was while adding the Radio Havana into my already naturally overdriven amp's tone, with the pedal set in a medium setting, the gain at about noon and decay just passed the middle. Noodling around and plucking notes also created some interesting sound effects. If you're into the experimental side of things the Radio Havana will tickle your curiosities in all the right places.

A few days into my playing with this pedal I also decided to use it in a jam session with another guitar player, bass player, and drummer... no singer tho. I wanted to see if the Radio Havana played well with others, meaning other players and other pedals. Pay attention now. Once having had an idea of what I could do with this pedal and what settings I liked, I began to also experiment with other effects in the chain. For me it was a reverb pedal pushing a little bit of effect played through my 5 watt cloned amp, and last a clean booster to help get me an extra amount of overall level. Through this little chain of effects I was able to create a simple to use simple to dial in effect that made for some of the best psychedelic guitar tones I've ever created. The first thing I'll speak on is the reaction of the other ears in the room. The collection of musicians instantly dug on how pronounced and who well the signal cut through the overall mix. You wouldn't think a pedal of this kind would do that but having it being built with top notch materials, by hand, and with a life time warranty should assure you this ain't no toy. The drummer addressed how clear my signal was and the bass player dug that I didn't cut into his low end tone. The night's jam went on and on with myself enjoying my new little box more and more with every stroke of a chord. Which is why this pedal rocks so much! The more you use it the more ways you find it works in just about every situation. At one point I was even able to mimic some pretty intense fuzz tones by playing it through my amp fully overdriven. The sound was absolute beast!

A pedal this simple and amazing needs not much of an introduction, it is something you need to experience on your own. I play lots of different types of music and have jammed with some really heavyweights as far as the world of music goes. This along with my awesome little blog her have afforded me the ability to come across some really kickass gear. The Radio Havana is most definitely one that will remain on the top list. This pedal is special in the sense that it creates really amazing low-fi gritty guitar effects, while at the same time if given the attention able to give you much more. Give yourself something to write home about and peep out the Radio Havana!

For more info on the Radio Havana or the rest of the Heavy Electronics line-up go to www.heavyelectronics.com
Posted by Alfie Cruz at 1:39 PM