Treat Yourself to Something Reeeaaal Nice 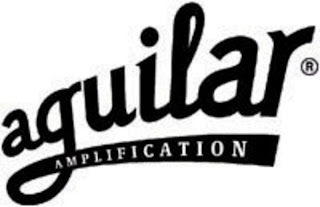 Next on our list of killer pedals is a little number from the talented and amazing people of Aguilar Amplification. Last year I had a chance to try out a bunch of these pedals on bass guitar and was blown away by the quality in tone and wide range of sounds I was able to get. It didn't end on bass guitar either... no sir. I in fact also plugged some of these pedals into a bunch of my guitars and guitar amps and the outcome was nothing short of amazing. I also had a chance to meet the good folks from Aguilar at NAMM last year which really tuned me into what they're doing and the direction they are headed in. Let me just say this: Go out and try these pedals - you will not be sorry and very glad you did. 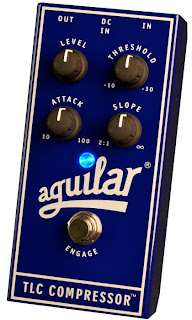 My first experiment with the Aguilar TLC consisted of a P Bass and a Ampeg SVT. I dialed in a simple signature snappy P Bass tone, with lots of rounded corners and plenty of punch. I began with some subtle settings, tightening up the overall sound and getting more definition. The TLC quickly dished out more clarity making things sound sweeter and richer. I started first with a medium low level and ended up cranking the amp just about full blast. At low to medium settings the pedal accented all of the bass guitar's and amp's magic and mojo. Then once cranked things really became noticeable. My experience with most compression pedals has been they don't hang in there when in comes down to gigging or recording. Either they become too noisy or they just can't cut it. This is why studio compressors are so praised and so useful. The TLC was more than able to hold it's own. One very nice thing about this puppy, something I really dug, was it's low noise output. This is probably the one thing that turns me off to most comp pedals. With this pedal I was able to blast my bass amp and thump away at my bass guitar's strings like a madman. In the end the pedal stayed chill and quiet. I got no unwanted hissing or white noise. But more importantly was how quiet the pedal was when I wasn't playing. Here is where this pedal comes in handy for those of you looking for a proper gigging compressor. I also plugged the TLC into a higher output bass which worked equally as good. What I liked about playing this pedal through the higher output bass pickups was how well it helped roll off the high end sounds and jagged corners. This brought a lighter fluffier attack to my overall tone which made things sit much nicer when jamming with other instruments. I did also gig with this pedal, and on stage the pedal did more than it's job, falling beautifully into the mix and standing out just enough to accompany the guitar, bass drum, and vocals. Setting the compression to the club's room was cake! On the other side of the spectrum, in more extreme settings, the TLC also did a great job. The pedal's threshold takes care of a huge range of sounds and tones which helps you achieve just any sound or musical style you're going for.

Round # 2 (Electric Guitar)
For me finding a good compression pedal to team up with my guitars seems to something I've always had lots of trouble with. Really there has only been a handful of comp pedals that I've enjoyed. The TLC quickly became one of the few. I broke out my trusty bucker equipped Tele and my buddy's Princeton Reverb. The goal was to dial in a solid plunky country tone with plenty of meat and potatoes. I help back on the amp's reverb and rolled the eq straight up the middle. With a little meddling of the TLC's controls I was able to quickly get the sound I wanted. The guitar sang out lots of spanky goodness making each string sound like it's own thing. I was able to hear every little nuance and accent I played. My chords sounded off with lush clear projection, which made everything sound absolutely beautiful! Smoothness was the name of the game when playing through this pedal. The Tele jangled and chimed through the amp's big'n'bright tone. I was able to get plenty of sustain from my playing without any of the unwanted extreme sappy sounds. The TLC maintained my pick attack and left my guitar's natural character intact. While playing around the guitar I began fooling around with other pedals, such as overdrivers and distortion pedals. With overdrivers the pedal added a chunky ring to the overall sound that made things sound bigger and badder. I noticed my lows became rounder and warmer, with the highs becoming clearer and easier on the ear. I also got beautiful string balance that cut right through like a razor. In minimum compression settings the pedal gave the guitar's sound that hint of juice that helps bring one's tone to life. By adding in some of the pedal's level control I was able to naturally bring the amp's tubs into some pretty sweet gritty overdrive. This sound worked nicely for craning down on some classic country rock chord play. Blues and funk also sounded quite nice. I ran through some sweet licks and rifs and was able to hear every note with absolute authority. There is no doubt on my mind this pedal can hang with al types of music styles. Anyone hunting for a killer all around comp box would do themselves proper by grabbing one of these.

Some compressors squash your tone much too much, or just bloom and rise in the wrong ways. Something we're all too familiar with. The TLC's control layout made things very easy and user friendly. It took a bit of playing with the TLC's controls but once I began trusting my ears everything fell into place. This is what I tell my readers when the write in asking how to use compression, just trust those ears. Another great use I got out of this pedal was recording with it. I was able to get these very balanced, steady, and defined bass and guitar tones which were very easy to work with when mixing. The TLC is also very transparent, and instead of adding color to your tone - it brings what is already there to life.The magic in this pedal all comes from it's control layout and the quality of it's sound. This is what makes this little baby stand out from many others. Aguilar Amplification really did some number when designing this pedal and it shows right off the bat once you plug in and play.