Out of this World

All you drooling right now continue to keep on drooling - cause this pedal sounds as good as it looks! I'd like to introduce to those of you who aren't familiar with Analog Alien to one of the coolest pedal companies I have ever come across. I will tell you - I have been one lucky son of a bitch to have run across these cats. There are a lot of people building pedals out there today, and many of those people very talented. We have come across a stompbox revolution of sorts. A time where tone is everything again, and where what you play and say are two different things. Music is once again making a come back in a beautiful way - thanks to all the wonderful gear that is out there to motivate and inspire us. It is cool little companies like Analog Alien that sit in the front lines making sure we have the weapons needed for the battle. This is what happens when a couple of dedicated tone hungry cats get together to make a pedal. I bring your the... 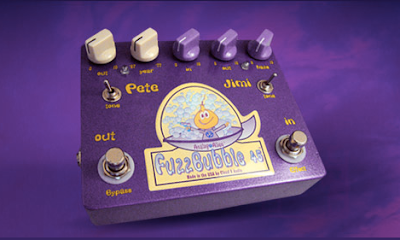 The first time I saw this pedal was one of those moments when I said to myself; "Holy crap, now that's a pedal!". Boy was I right. This is baby is built extremely well, was designed to be user friendly so you can get the tones you want quickly, and ships with a very cool mini lunchbox which it is stored in! This is a two channel stompbox which lets you choose between a Pete side (overdrive/distortion) and a Jimi side (distortion/fuzz). What more can you ask for? The Fuzz Bubble-45 is the pedal for that classic rock tone addicted player. For those of you who dig those marvelous 60's-70's tube amps. For those who listen and grew up with those insanely great sounding rock gods of yesteryear.

(PETE)
Getting a great sound of this was as easy as plugging it into a decent tube amp and guitar. I went with my semi-hollow body Hagstrom Viking and modified Hot Rod Deville. The handwound humbuckers and 4x10 Jensen's seemed to take to the pedal like a hand and glove. I began by setting the amp to a big warm clean tone, with all of it's controls set at around 7 and reverb circuit turned completely down. I started with the Pete side, setting it's Out knob to 50% , Year knob at 67', and it's Tone switch in the left position. Once engaged the pedal pushed out a very smooth'n'cruncy natural sounding classic rock dirt tone. The sound had lots of defined grit which made each string come through with spectacular delivery. This tone was perfect for an get-go all around rock tone. I played some of my favorite classic, blues, and alternative rock tones and got nothing but magic. Chords especially sounded good, along with double stops and string bends. The big'n'beefy overdrive produced by the Pete side reminded me of my favorite golden era rock tones. As I went up on the Year knob and added more gain the pedal continued to give me more mojo and inspiration. One thing which I really dug about the Pete side was how well it owrked with my guitar's volume. Using my guitar's volume knob I was able to control not only the amount of grit, but also the feel, response, and character of my tone. I next flipped the Tone switch to the right side and like an atomic bomb my pickups pushed out more low-end muscle. My riffs sounded bigger and stronger, and chords even beefier and dirtier. The Tone switch I imagine would be the perfect little feature for either cutting through a mix or adding more body to an overall band's sound. In both positions the Fuzz Bubble-45's Tone switch was able to keep it's definition and smooth feel. Switching the pedal up to year 77' really made a difference not only in the amount of gain, but how it all worked with your pick attack and overall sound. Here I got more aggressive overdrive tones which really became more like distortion. But unlike modern distortion the Fuzz Bubble-45 is able to maintain a very velvety creamy classic feel. Along with the semi-hollow body I also played this pedal with a Strat, a Tele, and a Les Paul (of course). Each one of the guitars created it's own special collection of rock tones, making this one of the most user friendly circuits I've ever used.

(JIMI)
Switching over to the Jimi side was an entirely different ballpark. Here I got a wide variety of very useful fuzz tones. I began by plugging into my partner's Les Paul and 7/15 watt amplifier. Now, on it's own this amp of mine has always produced some pretty sweet rock tones. It has been one of my favorite amps to plug fuzz boxes into and one of the best recording amps I've ever used. The Fuzz Bubble-45's Jimi circuit quickly and beautifully produced some of the best classic fuzz tones I've come across. I began with both the In and Out ch in the knobs at around noon, the Haze knob at around 15%, and the Tone switch in the left position. The pedal kicked out rockin' good subtle yet powerful fuzz tone that made my little amp sound much bigger than it actually is. Sliding up and down the neck playing blues and rock licks felt and sounded like something from another time. I was able to hear, and better yet feel, a big stack of harmonics and string ringing goodness. The softer I plucked the strings, the less the pedal growled. The harder I smacked down on the strings, the more the tone came to life and the more it knocked out big'n'bad fuzz. With the In knob I was able to tame and mellow out the sound of the fuzz, making it easy to tailor to whatever style of music I was playing. As well as the In knob working nicely, my guitar's volume knob gave me even more control and let me tap into even more crazy good rock tones. Some vintage fuzz boxes when doing this do one of two things; #1. They either become too thin and brittle, or #2. Just waste away the entire feel and vibe of the fuzz effect. The Jimi circuit I assure does non of these things. With my Strat I was able to use the pedal to dial in the biggest and meanest sounding fuzz tone, and by rolling down the guitar's volume able to get back to my jangly signature Strat sound. I was able to get some super cool feedback effects and strange ambiances just by holding the guitar in the right direction or playing the strings in a certain fashion. All you psychedelic rock monsters will appreciate and dig the hell out of this pedal. There's nothing better than blasting down in a rad collection of single note fuzz riffs. This pedal lets you beef up your licks or make them cut like razors. With the Tone switch giving you even more variety to choose from. I also played the Strat and Fuzz Bubble-45 through a Super Lead, which indeed was something to write home about. I will just say this - Everyone in the lockout studios was quite jealous that day. I had the walls ringing and shaking as if they were about to come down. I dialed in the Super Lead to a killer natural ovedrive, and stacked on top of it the fury of the Jimi side. If you've heard the best Marshall and fuzz tones combined you have an idea of what I was able to dial in. I found it easy to match both sides so that switching back and fourth was cinch. I know I get frustrated trying to find the right combination of overdrive and fuzz to bring out on gigs. With this pedal you get the best of both worlds all in one very cool looking box. All in all you can't go wring with this pedal, and I in fact found nothing I disliked about how it sounded or worked. The guys over at Analog Alien definitely own a special gift that lives in a few. I would kill to see what else crept into their minds, what else they'd be pushed to build.

For more info on the Fuzz Bubble-45 or Analog Alien go to www.analogalien.com You ill find some cool info on the history and making of this pedal. There are also some pretty cool vids out there for those of you that want some audio of this monster. Use our Youtube search engine to hunt down some oft hose vids. We will be sure to keep you guys posted if more comes out of this unique and talented pedal company.
Posted by Alfie Cruz at 7:00 AM