This my dear readers is a piece of gear I was especially excited to have discovered. The simplicity and capabilities that this gadget is able to provide is nothing short of genius! If ever you've played in a band, recorded music, or just jammed with friends - you know the hassle of getting everything dialed in and mixed just right. Playing live shows I have sat in just about every seat possible - from guitarist, bassist, and singer, to drummer, dj, and horn player - just to name a few. And in each role I have ever played in a band there is one issue that has always stood out above the rest - that being poor stage mixes. Unless you're playing a proper gig, have your own sound guy, or have an expensive in-ear monitor setup - chances are you'll end up with something not so pleasant. You know how the story goes; You start with a haywire collage of confusing noise, end up having to sacrifice one thing in order to benefit elsewhere, and then the war between what will sound decent starts to work it's nerve. For ages now I have been asking myself "Why and the hell doesn't someone come up with a simple fix for this problem?" With all of the technology out there one would think there would have been an answer to this long ago. Well earlier this year my dreams were answered, and to my surprise this creation wasn't expensive, complex, or hype driven (which was nice for a change). The responsible party for the Rock Box and man behind the Rock On Audio brand is a passion driven cat named Pete Lewis. If you guys have been hunting for a simple quick solution to your monitoring needs, please continue. 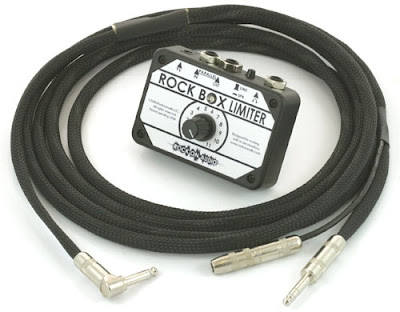 (Rockon Cable)
--------------------------------------------------------------------------
It all seems pretty darn simple now doesn't it? Well that's because it is. This product helps you experience the magic of crisp clear sound, freeing you of that muffled unpleasant stage noise, all in a simple easy to use setup. Wireless systems up until now (at least the decent ones) are expensive and usually only found in professional setups. A good quality in-ear setup makes for a spectacular tool when playing huge stages, clubs, arenas, and outdoor venues. But what about the rest of us who aren't quite at the jumbo venues yet, we could use some help too. In fact, it is on smaller stages where sound is usually at it's worst, where monitors are at their cheapest, and where one can take all the help he can get. The Rock Box Limiter and Rockon Cable are the answer to all of our dreams.


Putting this little gem through it's paces I must admit was quite a blast. Do not let the size of this gadget fool you, it is capable of fitting into more applications than one might think. I was able to use it with many different in-ears and headphones, and in a bunch of different live and studio applications. The first task I assigned the Rock Box to aid me in was as a simple headphone amp. Here I paired the Rock Box up with a high performance set of Monster® Jamz™  in-ear headphones. I plugged my guitar into my pedalboard, then out into the Rock Box's input, and in-ears straight into the Rock Box's headphone input with a mini to quarter inch adapter. My first impression of this little box was how quiet it was and how crisp and defined the signal was. My Hagstrom's humbuckers came through beautifully with lots of beefy lows and mids, and rich'n'creamy highs. Another impressive thing about this piece of gear was how much output it had on tap, plenty for any stage or band practice. To get a little ambience into the in-ears I turned to my reverb pedal, dialing in just enough to let things breath. Here I also began to experiment with my dirt boxes (overdrive-distortion-fuzz-etc..). Surprisingly enough they all sounded pretty damn good. Usually pushing any stompbox directly into any piece of gear sounds flat and lifeless, but this was not the case here. As a late night practicing tool or for those of you who'd like to give your roomates/parents/girlfriend a break from the noise - this baby works like a charm. 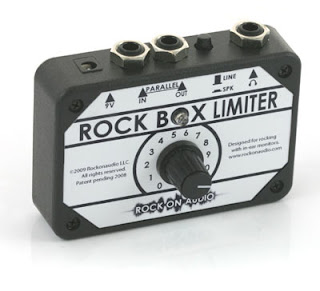 Next came using the Rock Box in jams, practices, and live gigs. First I brought it along to band practice, and here is where I found this baby very very useful. If there's one thing I cannot stand when in a jam or band practice it's weak vocals and loud drums. As a guitar player it is important for us to hear the singer. It helps us with the vibe and feel of a tune, helps shape the dynamics in our playing, and just plain ol' keeps us in the moment. In a matter of seconds I was able to run the PA's signal into the Rock Box and hear exactly what was coming through it. With the Rock Box's volume control I was able to maintain and tame my mix, and with my set of kickass JH Audio JH 16 Pro's plugged into box I had myself some super quality overall sound. I was able to hear the lead and back-up vocals like never before!!! Super rich and full, with plenty of sparkle and clarity, and with a superb frequency range. Getting the rest of the instruments into my in-ear mix was a cinch. To get both guitars into the mix we setup a couple of SM57's in front of our amps, with the bass we ran it into a DI and split it's signal to the mixer and into the amp. The quality in the JH Audio's really let the bass hit hard and smooth. Then last for were the drums. Believe it or not, the existing mics in the room and bang in the drummer hit created plenty of drums to be heard. Later I also experimented with room mics, a stereo mic on the kit, and micing kick and snare. All of it worked like a dream! Band practice had never sounded so damn good. Which leads us to the stage. Again the Rock Box quickly and beautifully came through like a champion. Here it was even easier to dial in and get my in-ear mix - in fact I didn't have to do much. Here I shared my stage monitors/wedges mix with the Rock Box. To do this I just ran the stage monitors out into the Rock Box's in and whallah! Just like you would when you play a gig and ask the sound guys for more drums, more vocals, less of this, less of that - I was able to do this in my ears. On the quality was stunningly better. What was really impressive was how quickly it all went down. With the accompanying Rockon Cable the task is child's play. The Rockon Cable's design I must say  is genius! I gotta take the time here to give Pete some major props. The cable just like a standard cable plugs into your guitar, but then about a foot or so down sits a 1/8" (mini) input jack for your in-ears/headphones/etc... The bottom of the Rockon Cable spilts into a 1/4" plug which goes into the Rock Box's headphone jack, and a 1/4" output for running a standard cable into it and then to your amp, pedals, or pedalboard. I found this little piece of gear works great with every gig I brought it along to and every jam I sat in on. With the Rock Box's Line/Speaker switch you can control and tame any signal. The built in limiter will also make sure your ears are always protected and in the safe zone. All in all this is hands down one of the most ingenious, coolest, and most useful pieces of gear you will ever own in your arsenal. The Rock Box Limiter makes it possible for anyone to own a great sounding IEM setup. And for it's price you really can't beat this little gem. 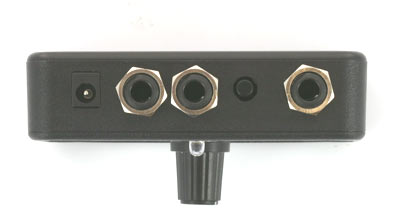