MXR has been doing it and doing it well for quite some time now. This is a company that has been steadily creating magic in a box for as long as I can remember, and a company that through hard work has become a favorite of players from every walk of life. Thinking back on my own pedal adventures I cannot think of one stage in my playing career where I have not had an MXR pedal as a part of my tonal arsenal. The MXR line has consisted of everything from timeless classics, no-frills champions, one of a kind originals, and let's also not forget the many MXR sleepers that have come to the surface to make our tonal dreams come true. Recently MXR chose to redesign a handful of their most sought after creations, breaking them down to their purest form, and releasing them onto the masses. Simple these pedals may be but nontheless quite useful within any situation. This little collection of pedals was one of the coolest of 2010, and below I will share with you my favorite of th bunch. This is a stompbox that once again shows us the beauty of the analog circuit and why less is most definitely more. 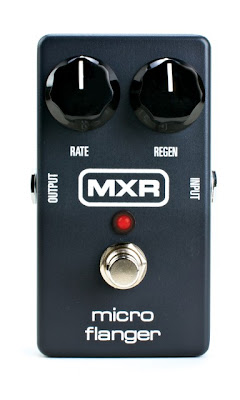 Micro Flanger
M152
--------------------------------------------------------------------------------------
This new M152 Micro Flanger is based around the sound of the super popular M117 Flanger. With the ability to knock out many of M177's tones and many of it's own, the M152 stands a beast in it's own right. Sporting an analog circuitry and designed with kickass bucket brigade technology, you can be sure you'll get the warmest and smoothest of tones. A true bypass footswitch has also been added to this design for the ultimate in tone preservation and clarity. Control layout is pretty simple - Rate knob for controling cycling speed, and Regen knob for dialing in overall intensity. I in fact have had lots of experience with the original 80's M177, and if there's one thing that has always impressed me about this pedal it is it's range. I was excited to discover the Micro Flanger rides side by side with it's classic cousin covering may of the same ground. How MXR was able to pack so much tone into such a small box I do not know, and do not care. All I know is that with all the gigantic stompboxes floating around out there it's nice to see something that saves pedalboard space while at the same time getting straight to the point.


With an effect like the flanger you always have to be very careful how you use it. Dial in too much of the flanger and your root tone will suffer, but then use too little and you won't get the effect's point across. The key is to tap into that magical little area where your root tone and the effect will get along their best. With the M152 Micro Flanger it wasn't all that tuff to find it's sweet spots, thanks to it's stunning sounding analog circuitry and simple yet versatile control layout. I found the M152 capable of producing spot-on vintage flange tones, as well as rich and aggressive modern sounds. I first paired the pedal up with a big'n'beefy 100 watt Super Lead and my single P90 Junior copy. I worked in a mellow slow and subtle flange effect from the M152 and dialed in a nice'n'gritty rhythm tone from the amp. I picked out a handful of pretty chords to accentuate the pedal's velvety sound. The pedal produced a glowing type of effect that added imagination to my guitar's tone. The flange effect blew in and out like a mellow breath, never taking over my amp's tone while letting it's voice be heard. The subtle effect worked great for adding size to my chords and for giving the overall tone some sweet character. At medium flange setting it was more of the same. Here I found some of the coolest sounds from this pedal. Some flanger pedals you can't even dial into their medium settings without having things sound too strong. Here is where I give MXR some major props. They designed a flanger and not some extreme strange cousin. Both at high and slow speeds the Micro Flanger creates absolute magic. The little bit of grit being produced from my amp married perfectly to the Micro Flanger's warm and focused sound. Here I kicked in a bit more gain which again accented the flange effect beautifully. For those of you high gain freaks wielding hot rodded super amps, this flanger will do wonders for you. It doesn't matter if you use P90's, humbuckers, Strat or Tele single coils, or any of the many other pickups out there - the Micro Flanger will do you proper. Plugging in my buddy's Les Paul got me some more really hot tones. The fatness and weight of the humbuckers drove the pedal to really knock out some killer sounding classic sounding flange. Rolling the amp up to lead tones and getting the Micro Flanger to create stinging flange tones was absolute Rock God heaven. The effect swam in and out through the room helping to create wild psychedelic visions. Chugging down on big power chords, digging into double stops, bending strings, and striking down on harmonics all sounding spectacular, if not epic! Really there isn't much more to say about this little gun metal grey demon. Go out grab one plug it in and see for yourself. A small footprint enclosure, two knobs, and a simple design is all it takes to make this one of the coolest pedals in the scene today. The M152 Micro Flanger is small, elegant, and packs a punch much larger than most pedals twice it's size. It is pedals like these that make MXR the company it is today. With the experience that these cats own and the group of builders/designers that back their play - MXR continues to sit way up high on the totem pole.

For more info on the M152 and the rest of the MXR/Dunlop Manufacturing collection go to www.jimdunlop.com You can read up on a ton a cool info on many many of their products and check out some really cool vids. We will continue to bring you more from our friends at Dunlop so make sure to stay tuned. More to come very soon!
Posted by Alfie Cruz at 8:07 AM