As a gear fanatic and tone hound these are the things I love most - Upgrades and mods, a new piece of gear, and a proper gig or session. But there is something else which brings even more joy, something that stands out way above the rest. I call this "the mother of all rushes"... and that is - The discovery of a completely new and original product. In our history of gadgets, gizmos, and whatchamacalits, there are non more exciting than the coming of a new creation. Whether it be cosmetical, electrical, or for user friendliness. For those of you who have never heard of Voltage Guitar Pickups I implore you to please pay attention and make sure to visit their website once you've run through our post. I was blessed with a set of Voltage Chaos pickups earlier this year and the only thing I can say is... things will never be the same. 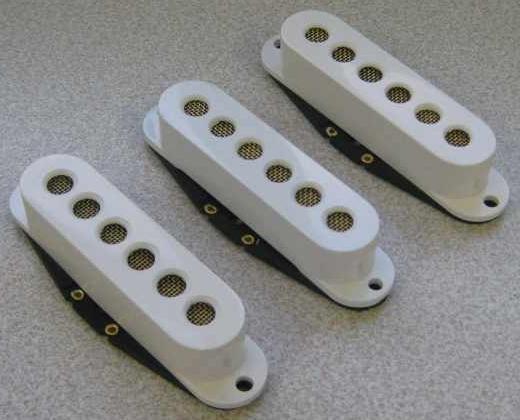 Take a close look at these pickups. At first look they may seem like just another everyday normal run of the mill Strat set. But then you look closer and notice there is something you have never seen on a set of Strat pups. Builder and designer Ben Sheppard calls this his "Voltage" single coil design. Now, this cool mesh grill design may look cool (beyond cool if you ask me), but there is a purpose behind this hip look. Ben designed these pickups to provide the player with healthy jumped in both power and sustain. This gives the already slick and unmistakable "Strat" sound an even cooler and much more versatile tone. The Chaos pups are wound from 5.8k to 6.2k and built with the finest parts and components. Each pickup is also calibrated for use in it's proper position for the ultimate in tone shaping and pickup blending. I've had a chance to rock these pickups now for a good period of time, and I will say they are like nothing I have ever played through a Strat. I have gigged, recorded, practiced, written, and compared these pickups to many others. One thing is for sure... these baby's are an animal all their own. This was a product that at first glance had me impressed as well as curious beyond belief. And even cooler was how great these pickups looked once they were wired into my guitar. Many times a company or builder will use looks solely to sell his/her product, and many times this technique works. This is not one of those incidences, nor is this design a gimmick of any kind.


For my testing of these pickups I would plug into a handful of different amps, A/B them with a Strat sporting traditional pups, and would run them through a handful of different stompboxes. I began the adventure with a 22 watt 65' Deluxe Reverb reissue (on loan froma  good buddy) plugged into the normal channel, with a coily Bullet Cable and nothing else in the signal chain. The normal channel's Vol/Bass/Treble I set straight up the middle, this giving me a big'n'punchy blackface tone that sounded like absolute heaven. I began with the neck pickup, strumming away and a handful of different licks and chords. Right away the Chaos pickups chimed away with beautiful brute force and originality. It wasn't so much that they sounded extremely different or alien of a vintage Strat pickup. All of the snappy cutting power of a standard Strat pickup was there, only with more focus and clarity. The highs that these pickups let loose had a bell-like top end that shimmered and shined like diamonds. The bass was very present but not overpowering, with a smooth curve and tight corners. Then there was the midrange that these pickups produced (my favorite), a sound that slammed right in-between everything else and gave the amp a well balanced overall tone. The fact that these pickups gave more of everything made them very very versatile and also gave them a wider dynamics range. To warm them up I only needed to roll back on the guitar's tone control, and rolling back on the volume they would hold their own. Some pickups you start playing around with the guitar's volume control and you listen as your tone goes to all hell. Same goes for the guitar's tone knob. These pickups responded beautifully to this little trick, making them a prime choice for those of you who dial in & out on the fly. I also noticed how sensitive they were to my pick attack. This would later provide me with some tasty tasty sustain when matching them up with an overdriven amp and dirt pedals. Next I ran through a bunch of different chords, from the simplest to the most complex. Through every type of chord I played I was able to get stunning good balance. The pickups created great string articulation and clarity, had plenty of bite, and were easily tamable. Even the lightest of my touches I was able to enhance what the amp would dish out. I then pushed the Deluxe Reverb into a natural tube driven grit, and here is where these pickups did most of their magic. What had been projected through my clean tones was now flowing even stronger through a wave of gritty goodness. It seemed like the lows, highs, and mids became even stronger once I added in a little grime. Touching down softly on the strings produced light semi-dirty tones that bloomed in & out. The harder I dug in - the more the Chaos pickups gave me. Through very loud amp tones I was able to control and mold amp feedback as if pushing a paint brush. And still I took them further. It was time for me to break out something a little stronger, something with more wattage and output. My next choice would be a Super Lead slammed into a huge sounding rock tone. I wanted to see just how much these pups could do. To get an idea of the differences between the Voltage Pickups and a traditional vintage set of single coil pickups, I first played through my 60's Strat build. I ran through some blues licks, rhythm power chords, leads, and bends and double stops. Comparing the standard set of pickups to the Chaos set I easily heard the difference. It wasn't a matter of better or worse, nor did one set out weigh the other in any way. With the Chaos pickups everything was brighter, thicker, and meatier. Instead of softer, warmer, and spankier like you would get from a vintage set. The rockin good tone form the Super Lead made for great classic rock, hard rock, punk rock, blues rock, and every other type of rock I played. Switching from one pickup position to another was something quite special. Every pickup position kicked out a character of it's own, leaving me with an arsenal of golden tones to choose from. Here I broke out the pedals. First I plugged into some dirt boxes, then modulation, then wahs and the like. Through clean boosters the pickups were enhanced, never getting in the way of the root tone and only taking it further. Overdrive pedals were are something you will discover these pickups love most. Just like overdriven tube amps I was able to get lots of richness and clarity. With fuzz boxes I was able to maintain better string separation and huge amounts of sustain. Mixed in with a little delay I was able to shape some of the most epic sounding rock tones I have ever heard. I needed not blend these pickups with a compressor or EQ pedal. In the studio the Chaos pickups proved to be a very powerful weapon, as well as on the stage, and in practice. Anyone looking for pull more from their Strat's would do themselves nicely by wiring in a set of Voltage Pickups. Up until now I have played these pickups through more amps, pedals, and effects units than I can count. Each and every experience has been a positive one, a memorable one, and one full of inspiration. Hands down... there is no way to go wrong here. 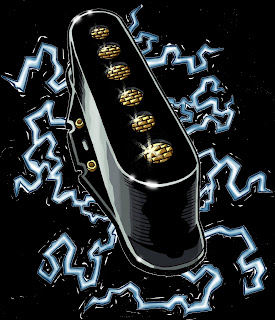 You can check out more info on Voltage Guitar Pickups by visiting www.voltageguitarpickups.com Also make sure to stay tuned for more pickup features from this magical company in the near future. Keep on tuning in for the rest of Analog War Cry's Top Finds of 2010!!
Posted by Alfie Cruz at 11:49 PM