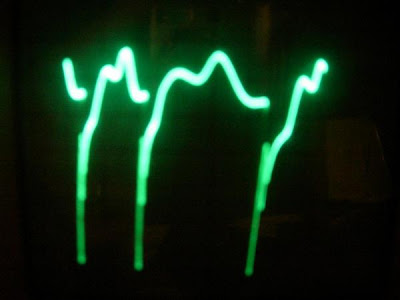 Having the amount of variety that today's effects pedal world has to offer, has provided us with just about every tool needed to recreate and shape any tone imaginable. Just look at any of your favorite guitar player's rigs, setups, or pedalboads, and you will be sure to find an impressive collection of stompboxes and gadgets. This has made today's music much more interesting and given us some of the most memorable guitar lines ever. Compared to 20 years ago, today's musician can pull off way more sonic stunts while performing live. This is all possible because of the awesome gear that companies like Mountainking Electronics is provided us with. Mountainking's stompboxes will take you down only one road - True originality. Alan Pavlica, the creator and builder of Mountainking Elecronics, is truly one of the most talented and inventive cats I have ever come across. Anyone who has ever tried to created something out of nothing knows it is not an easy task. If we're patient and put in the work, our efforts will be successful. And if we're lucky enough, every now and then our tone shaping adventures will give birth to something completely original and unique. Alan's stompboxes are here to make sure we don't miss any of these opportunities.
----------------------------------------------------- 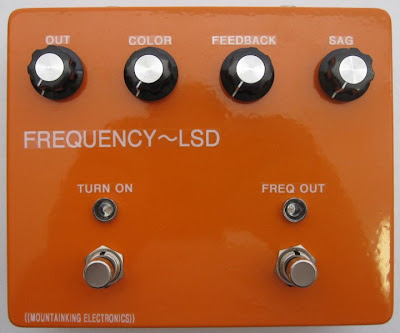 Frequency LSD
(synthesized-oscillating-note shifting-world of fuzz)
CONTROLS
Sag: Starves pedal's voltage - Creating a world of possibilities
Feedback: Works as feedback loop - Changing fuzz's character
Color: Works as tone control - Giving you many shades of sound
Out: Effect output - Makes it truly squeal
Freq Out Switch: Ungates circuit - Making things go wild
Turn On: Engages effect
----------------------------------------------------
Once the pedal boom kicked into full swing, and fuzz boxes became the talk of the town once again. Builders began to experiment with different tones, textures, and sound effects. This gave birth to an entirely different breed of fuzz box. Just like Hendrix, Page, and Townshend experiencing fuzz boxes for the first time, today's players also found new psyched-out colors to paint and express themselves with. I will have to admit - When I first came across my first "freakout" style fuzz pedal I was quite scared and damn confused. There was just so much going on with the sound that I had no clue what to do with myself. The Frequency LSD brought me back to this exciting and fresh world sonic assaults. The controls on this pedal interact so well with one another that the possibilities are just about endless. I won't go into the exact details of how each control works. This is really a pedal one needs to experience for themselves in order to learn it's rhythm. Instead I will share with you the many strange and beautiful shapes and colors I was able to pull from it.
What pickup, guitar, amp, and tone you play this pedal with really makes a huge difference in it's tonal outcome. How you pick and dig into the notes also affects how the sound and character will turn out. I wanted to start by getting as stinging a tone as possible, something that would cut through any mix. So I started with an ice cold Tele and AC15 clone. I ran the Frequency LSD straight up the middle and set the amp up as gritty and crunchy as possible. I was not prepared for the insanely cool sound that went flying out of my cabinet. The pedal created all of the characteristics of a traditional fuzz, only with a layer of thick synth-like overtones following closely behind. The possibilities with a sound like this are endless. For there is nothing better than a crazy sounding fuzz that can be used musically. A lot of the oddball fuzz boxes that are out there today just don't cut it. Either they lack in versatility or cannot be used to make anything that sounds like music. This is what I noticed right away that separated this box from many others. I began to dig in and let loose on some bluesy licks and riffs and was able to get everything from Black Keys and White Stripes tones, to QOTSA and NIN sounds. In fact, this pedal took those sounds to whole new level, by adding a world glitch'd out semi-controllable madness. Don't ask me how, but somehow Alan was able design this pedal to work extremely wild but with the ability to still deliver defined and clear notes. Even when I took the LSD to buzz sawing sputtering type tones I was able to hear what I was doing loud and clear. I started playing around with the Sag and Color controls and quickly the pedal responded by giving me an entirely new flavor of the existing sound. The further I'd turn the Sag control, the more it would squash and rip my sound apart. At extreme Sag setting the notes would even morph and grow entirely new sounds from one another. Very cool stuff. All that was going through my mind was psychedelia madness. I can only imagine what the cats in the 60's would have done if they had had access to something like this. Something else that really turned me on about this pedal was how well it worked with other effects. It didn't matter what you stacked it up against, it would blend to create even more extreme sound effects. I was able to convert my guitar into something completely different sounding by just splashing on some delay or reverb. So far the pedal worked great through a dirty signal, but now it was time for some spankin' good clean tones. I broke out my modified Hot Rod Deville and partner's Jazzmaster. Once engaged the Frequency LSD ate everything clean about the sound converted it into one of these meanest sounding fuzz tones I had ever heard. I has never heard such insane sounding square wave and sine wave fuzz tones in all my life. I then discovered while playing with the controls that the pedal would self-oscillate. I was able to control the sounds with my guitar's pickups by switching from neck to bridge, and by playing with the tone and volume knobs. I also plugged in a Les Paul, which was able to get me some really tasty smooth fuzz goodness. I could literally sustain a note as long as I wanted by simply digging in and shaking the note with my fingers. With a little patience I was also able to get some cool vintage Shin-ei fuzz tones. If you've ever played one of those old Japanese fuzz boxes you know how hip and original a sound they can create. By the time I was done playing with the Frequency LSD I had more fuzz tones under my belt than I knew what to do with. In today's world of rock'n'roll, just like in yesterday's world of rock'n'roll, there are no rules. You take what you find or can muster up, and you mold into something creative. Tools like the Frequency LSD are the perfect weapons to give anyone a head start.
---------------------------------------------------- 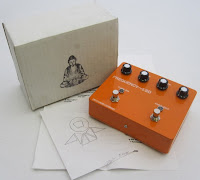