Those of you who have been doing their thing in the boutique pedal world for sure have come across the HAO name. On many guitar players pedalboards have seen these pedals mounted and ready for war. In fact I myself have had much experience with these pedals, at one time the HAO Rust Driver was the main OD pedal on my pedalboard. After this I went and tried more of the HAO pedal line. Not once was I disappointed. This of course led me to the new HAO "Premium Workshop" models, and if you think the first HAO run was killer wait till you plug into these. The first of the HAO Premium Workshop offerings is the Omega Drive Sixteen. A no-frills, well rounded, cream of the crop overdrive pedal. From the get-go I was stunned at how freakin' great it sounded. I stacked t up with everything from p90's and humbuckers, to Tele and Strat single coils. The OD-16 is easily one of the top overdrivers to come out of 2010, and definitely one of the best dirt boxes of all time. Plug in and see for yourself. 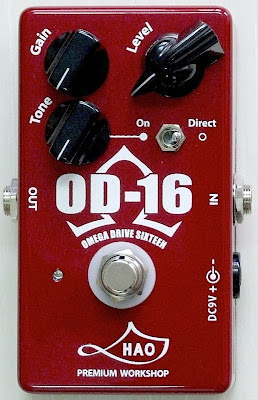 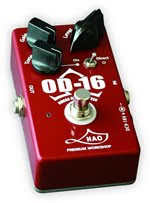 For more info on HAO Premium Workshop go to www.godlyke.com or click the Godlyke direct below. We will be bringing more from this kickass pedal company in the near future so keep them eyes peeled.