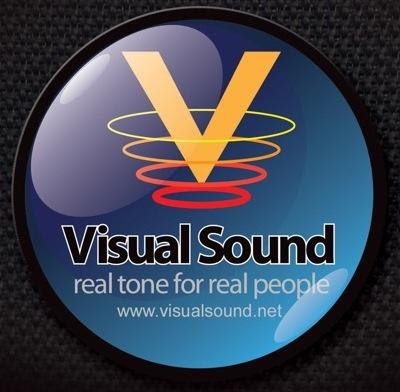 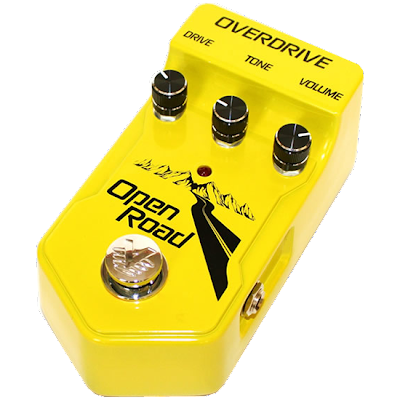 Open Road
overdrive
* Custom designed switches rated at 10 million hits
* Circuit protection against AC (vs. DC) adapters
* Hand wired jacks
* Knob protection built into the die-cast aluminum housing
* No white noise
---------------------------------------------------
These are only a few of the features that make the V2 series pedals such awesome champions. Visual Sound really went to town designing a collection of stompboxes that are capable of delivering impeccable tone, able to hold their own in all applications, and most important capable of standing the test of time. The Open Road is only one of Visual Sound's newest models, a pedal designed to pack a natural, tube-like, rockin' good punch. It's Drive, Tone, and Volume controls make the Open Road a versatile yet simple pedal to dial in, and you'll find this pedal beautifully adapts to any amplifier or guitar you pair it up with. The Open Road compliments your root tone, and keeps things organically tasteful.
I had no trouble getting a killer collection of tones out of the Open Road overdrive. In fact this was one of the easiest pedals to dial in I have ever had the pleasure of plugging into. The amp of choice that started off my duel with the Open Road OD was my trusty modified Hot Rod Deville. The guitar my black humbucker equipped Hagstrom Viking (a.k.a. Erica). I set the amp to a big'n'bright clean tone with lots and lots of lows, and lots and lots of crispy highs. With the Open Road engaged I was able to take the fat, crispy, and clean Fender tone into a smooth'n'creamy, great sounding universal dirt tone. I was able to knock out blues licks, classic rock riffs, alt-rock runs, funky leads, and country slaps. The Open Road dishes out this great sounding mid tone that doesn't eat up your attack nor leaves things sounding frail. It is one of those "on the brink" of break-up rock tones that you can easily control with the stroke of your guitar pick. I was able to get fully clean, semi-clean, gritty, and light overdrive tones all by the weight of my hand. The real beauty is the tube-like warmth, response, and projection that the overdrive projects. You'd swear there was no pedal there (which is exactly the kind of pedal I like to play). Visual Sound nailed that big, wide, and open style dirt tone that you can only get when pushing a tube amp to the limit. I was also able to get these beautiful dark jazz tones by setting the Drive low, and dialing the Tone knob between 8 and 11. Pulling out classic rock tones was another task this pedal made easy. Tone just behind noon, Drive at around 1-2'o'clock, and Volume slightly hotter than unity made for one stunning woman tone. Rolling back the semi-hollow body's tone knob, and flipping into the neck humbucker made things even sweeter. I was able to get perfectly balanced string articulation and note definition, and a ton of string control. It's the kind of overdrive that somehow hangs on to the air even at low drive settings. Growling and grunting with your root's clean sound still lingering behind. The kind of overdrive that lets your fingers do all of the talking. Chords were another area that the Open Road worked beautifully. I've been jumping into more complex chord structures the last few weeks, which if you're familiar with know can sound like crap when played through a weak'n'flimsy dirt tones. The Open Road makes this a dream! In just about every Drive setting I was able to hear my chords evenly and clearly. This isn't a pedal that falls apart and loses it's character when cranked to higher grit settings either. Not once did the pedal's overdrive become ugly, overpowering, or fizzy. Last I played the Open Road through an already overdriven amp tone. I switched amps to a 15 watt head and 1x12 cab, and guitar to a 70's spec Stratocaster. I pushed the amp into a slight howl by dialing in plenty of volume, mids, and lows. I throttled back on the amp's highs and used the pedal's Tone knob to shape the amount of treble I wanted in my signal. Cranking up the pedal's Volume control to help cook the amp's tubes a bit more also worked great. I ended up with a rich, dynamic, and powerful overdrive tone. Next I took that howl and converted it into a screaming banshee by rolling up the Drive knob just passed 3'o'clock. The pedal gave me one of the baddest sounding classic rock/blues lead tones I've ever heard from a dirt box. Working the guitar's tone and volume knobs into the mix created another world of sweet overdrive tones that left me playing and riffing for hours and hours. The single coil pickups blended with the overall signal like magic! The definition in my double stops, bends, and harmonics were immaculate. This is definitely a pedal worthy of a long run on my pedalboard. I was able to use the Open Road with my other effects, and it played nicely with my distortion and fuzz boxes. I give Visual Sound 2 thumbs up for this stunning creation. The Open Road makes for one killer weapon to have in one's arsenal. I am super stoked to get my hands on some more of Visual Sound's single effect units. Stay tunes, this is only the beginning. Analog War Cry will most-def be taking a gander at a bunch more from the V2 pedal series.
----------------------------------------------------
For more info on Visual Sound pedals go to www.visualsound.net You can check out a bunch of great sounding audio and video demos on their site as well. Visual Sound has also recently launched their GarageTone pedals. We will try our best to bring you guys as much info on Visual Sound's new gear as possible. Stay tuned.
Posted by Alfie Cruz at 10:47 PM