Space and Time at your feet 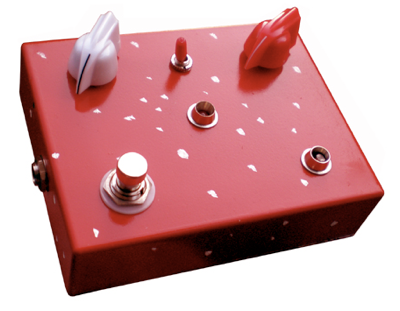 You may be saying to yourself "Hmm, doesn't sound like much." Which is perfect for the surprise that lies in store for you. There are so many delay pedals out there right now, lots of them doing really well, and lots of them capable of doing just about anything you can imagine. The cats at Moody Sounds took both the traditional and the modern to create one hell of a analog delay that'll expand your delay needs while maintaining a classic old school feel. I see the Mushroom Echo easily becoming an all time favorite and collectors piece in years to come. In the world of analog delays there are a few things we look for, user friendliness, good tone, and versatility. The Mushroom Echo delvers this and then some. When you first look at the pedal it seems like a very simple pedal, which it is. Only this pedal has a few tricks up it's sleeve. But before I get into the tricks and sonic layers you can pull off with this pedal let's first take a look at it's tone. One thing that is clearly noticeable from this pedal when you first plug it in is it's rich and warm sound. I'm a huge fan of tape delays, (who isn't?) they trail off perfectly and sound amazing. The only thing is they're not always the suitable choice for gigging or lugging around to band practice. Who wants to carry one around, take the risk of damaging it, and go crazy looking for replacement tape? The characteristics of the Mushroom Echo's delay is very very similar a tape delay and will fit comfortably on any pedalboard. For the price you will not find a more sweet sounding analog delay pedal. To use the Mushroom Echo as a traditional delay pedal you set the mode switch to Normal (to the right). The White knob controls your delay time and Red knob controls the delay amount. You can set it anywhere from slapback delays to med/long delays, there is no infinite repeat but it will trail off long enough to create some trippy licks and cool layers. Coupled with a good overdrive or fuzz pedal sounds killer with this pedal, the delays don't get in the way of the playing and trail off behind your notes perfectly. Now the Optical mode, this is where this analog delay separates itself from the others. On the lower right side of the Mushroom Echo is the optical eye sensor, moving your foot, hand, and even shadow over it will determine the speed of the delay. The less light the sensor is exposed to the slower the delay becomes. You set the speed you want to start with by turning the White knob and go from there. Moving your foot over it like a wah wah works best for creating experimental and unpredictable delay sounds. You can get anything from crashing sounds to bomb explosions, chorus effects to pitch shifting. The one really cool sound you can get from it is the dive bomb effect. You set the Red knob to the highest echo amount, flip the White knob to the slowest setting, play a chord and bring your crashing down on the sensor. The outcome is unreal! It is also possible to control the speed of the delay with your foot by hovering above it, slowly moving it up and down creates trippy warbling tape delay effects. The possibilities are endless. If you're a big fan of classic psychedelic rock this is the pedal for you. Come open your mind and let this pedal take your sound into it's world of madness and creativity. The Moody Sound Mushroom Echo is one of the most well thought out designs to be constructed since the analog delay pedal landed on our doorstep.
For more info on Moody Sounds you can go to www.moodysounds.se/
Look for more pedals from Moody Sounds to come in the near future.