Maxon...keeping it real since way back when.

There isn't one stompbox junkie out there who has not heard of Maxon's effects pedals. What they've done for the music scene with their killer effects and builds has held tight since first they peaked their head in the early 70's. Many of you might not know it but Maxon actually started out as a guitar pickup manufacturer, soon after they dove into the world of guitar pedals and the rest is history. The well known all mighty Ibanez line has also been manufacturered under the Maxon name, including the super popular Ibanez 9 series, where the Tubescreamer was born from. Maxon has definitely paid their dues and then some, having released some rare builds which have proven hard to find in these times of pedal madness. Today Maxon continues their quest to build an intelligent line of effects pedals, and if I may say so they're doing it better than ever. The last few years has seen the comeback of some of their classics which include their Vintage Series, Reissue Series, and Nine Series. The builds are top notch, heavy heavy duty, and road worthy to the max. There are a handful of mainstream companies that have impressed me in the last few years and Maxon is most definitely one of them. Imagining one of their boxes dying out is as close to impossible as I gets, get your hands one some and feel, hear, and see for yourselves. 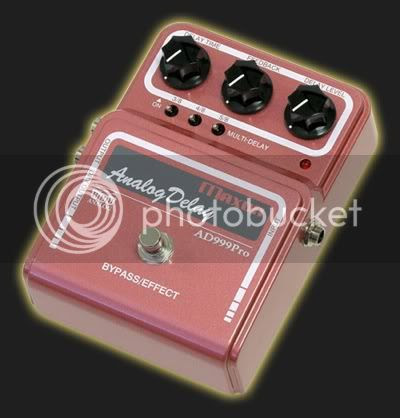 When I first heard of this pedal I thought it had to be too good to be true, there had to be some catch or fault to this pedal. When the AD -999 Pro arrived I went ahead and put it through it's paces, flipping every switch, turning every knob, and trying every setting combo I could think of. The result? Hands down the most versatile analog delay pedal I have ever come across. Both sound and build screams quality and class, if you're looking for the last analog delay you'll ever need you've found it. What is it we look for in a good delay pedal? Is it warm tone, is it clarity? The list can go on forever, the AD-999 Pro takes care of just about every need you'll ever look for in a good sounding vintage delay pedal. Insanely warm yet clear tone, wide delay range, user friendly control layout, and some tricks you may not of come across. It's build like all of Maxon's pedals is of the highest level, I've said it before and I'll sday it again, I'd find it extremely hard to damage one of these puppies. The three traditional controls of Delay Time/Feedback/and Delay Level all respond to the most minimal of changes which make it a simple delay pedal to navigate. The heart of this pedal and the reason it's sound is so addictive is it's four custom made Maxon MC4107D bucket brigade IC's, which deliver up to 900 milliseconds of the sweet, velvety, and lush delay...absolute ear candy. We all know how much fun a killer analog delay can be, tweaking the knobs in and out to create a circus of time-warped tones. The AD-999 Pro will never bore, use different combos of it's three multi-delay switches to dial in a ton of freaky but useful delay patterns, or use it straight up for more traditional applications. Picking out chords never sounded so beautiful, yeah that's right I said "beautiful". The pedal's effect really shines through where many of today's delay pedals fail, there are so many gimmick and conjob delays boxes out there promising this that and the other thing whiole in reality they hand you more knobs and switches than you know what to do with, try dialing in a useful tone with them puppies. Don't me wrong, I am a huge fan if expeimental music, tones, and sounds, in the end if something doesn't help produce music then it only keeping me away from it. You gotta admit there are a lot of noise boxes out there at the moment, some useful, many not. You'll never have to worry about the delays getting overly noisy, like the AD-9 Pro the AD-999 Pro also sports the RMS level sensor and noise reduction circuitry. Some delays can swamp out your tone, take over, and leave your music in the dust, not a problem here kids. Another way this pedal works great in is through your effects loop, it's dynamic range can adapt to any input level leaving you with nothing but gold baby. How many of you have tried this with other delays only to come across piercing tones and unwanted distortion? Lord knows I have. The ability to have the option to use the pedal through your effects loop cuts down the umber of effects running in your chain which saves you much needed quality tone. Speaking of tone, I had taken the AD-999 Pro out to the studio to see if there were some fuzz pedals I could match it up with (I like to cut the delay really short to get a killer ghostly effect), I was super stoked to discover the delay tones blended in just where they were needed. The fuzz stays strong and upfront while the delays tailor off right behind each guitar lick, kind of like the Dead Meadow and Black Keys fuzz tones. I am happy to say that I have found a wonderful use for this pedal and it will be making some appearances on my band's records and live gigs...come to think of it I believe I will give it a permanent home on my pedalboard.

Look out for more Maxon effects pedals in later posts. Analog War Cry will also be demoing the AD-999 Pro and many others in up-coming podcasts and videos. For more info on Maxon products click on the banner above, the Maxon logo in our links, or visit www.maxonfx.com
Posted by Alfie Cruz at 1:05 AM