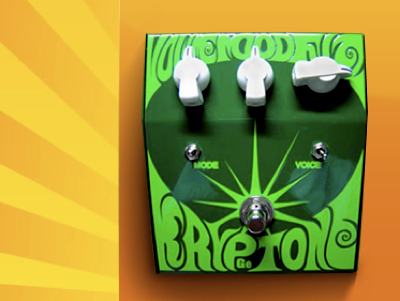 DEEP TRIP
Kryptone
Let the gates of hell and heaven be awakened, let it all come crashing down. Imagine what would rain down, imagine the sound. A sea of galloping, rumbling tone, shaking the earth with a growl so lovely it could only be harnessed and used in music. When I came upon Deep Trip Land I knew I was amongst my kind, my breed of human being. All the favorites of yesteryear came screaming out of this little green box and my mind was boggled beyond belief. Once again we are within reach of a sound so pure and flooded with classic rock blood that we have no choice but to play... play Rock and Roll. Tell me, does this sound like you?

Every once and a while, as musicians, we come across a piece of equipment that really shakes our bones, speaks to our souls, and pushes us to want drive the song writing machine to the fullest. These tools become keys to the doors of our creativity and unlock the moments where our most memorable writings are born. We become overdriven with madness and unstoppable playing ability. I would imagine Hendrix when he first heard the Fuzz Face might have experienced moments like these. This is what the Deep Trip Kryptone has been able to do for me the last few months, I have been struck with an inspiration so large I can hardly contain the number of tunes that have been pouring out (I might just have to dedicate an album to it). There is a definite signature tone that comes from the Kryptone, it is one of those tones that brings a flood of killer songs, flashbacks, and sighs of tonal relief. For someone who breathes and lives music this pedal can open up an entire symphony guitar sounds, knowing how to manipulate these simple boxes is where the magic lies. Being in my early thirties I missed the birth of the fuzz, that first run of fuzz boxes that all my idols played, and with all the hype that surrounds these wonderful pedals it hasn't been easy to purchase one. Thank god for the cats at Deep Trip. The origins of the Kryptone's circuit was spawned from the classic Vox Tonebender, not a bad place to start if you ask me, and like the Tonebender the Kryptone also dishes out a wall of rich, thick harmonics, impressionable EQ balance, and unmistakable classic rock voicing's. There are also treble booster characteristics which work great with chords and licks, throw a little overdrive in front of this pedal and you have just about every stage of distortion you could ever want. It's layout of controls all work very well together and don't over do it even at their highest settings, keeping it more of a traditional fuzz as opposed to the handful of freakwild fuzz boxes that are flooding the scene right now. The Volume knob controls it's overall output which can also on it's own drive your amp into gritty overdrive and grit tones. The Mood knob is an external bias control for one of the germanium transistors, a very very cool option. Just past noon (at around 1:00) is where the Mood knob does it's heaviest howling, it is in this setting that the 60's and 70's come rolling in. Roll it back to starve it of power and roll it up for a sharper cutthroat sound, every way around this control delivers class A velvet tones. The Fuzz knob controls the level of the effect, you will notice that for a fuzz pedal even at full blast it stays clear, the highs crisp, and the mids focused. The Mode toggle switches in a high impedance cell in front of it's fuzz circuit. This adds for a glassier sound, quicker response, and makes the Kryptone wah wah friendly. The Voice toggle switches between treble booster settings, vintage rock fuzz tones, and fat'n'chunky goodness, great for matching up with different amps, guitars, and instruments. Then there's the artwork (which I can honestly call a work of art) which is unlike any other I have seen on a pedal, it gives off a psycedelic/classic rock/acid vibe. A large LED at the front of the pedal shines green and adds to the mystery of it's capabilities, not a pedal that will bore, not a pedal you will throw away and store. It runs on the standard 9v power adapter or 9v battery, a handy battery compartment makes it easy to swap out old batteries. While I'm on batteries I have to mention something else very unique about this pedal. We all know how killer old batteries can sound, they give off those fluttery, burpy fuzz tones that sound great when blasted all the way. With the Mood knob you can dial in these tones and then some. I've been using the Kryptone with a slapback analog delay, hint of compression, and wah wah pedal. Controlling the volume knob on my guitar makes it possible to move in between rhythm and leads. I tested the Kryptone through a Tele, Les Paul, Mosrite, and Hagstrom, the pedal adapted easily to all four guitars all gave out four different usable tones. A great box to drag out to the studio. I would have to label the Kryptone a genuine classic rock pedal and a fuzbox destined for timeless fame. When Ed at Deep Trip Land described the Kryptone he said it was their "most sensitive pedal in terms of picking nuances and guitar volume/tone technique." I can only imagine what else they have in store. This only the beginning my fellow pedal junkies, oh yes there will be more, and like you I myself am very curious to hear where the next pedal will take us.

For more info on Deep Trip effects go to http://www.deeptripland.com/en/
You can also click the Deep Trip logo for direct access to the website. Look for more Deep Trip pedals on future Analog War Cry posts.
Posted by Alfie Cruz at 3:45 AM