If there is one town fit for the musician it is Los Angeles, Ca. Living here in LA has always provided me with every piece of gear I have ever wished for - whether it be a guitar, amplifier, set up pups, or rare stompbox. But there is another resource that Los Angeles carries, one that if you ask me is worth more than gold. And this is?.... It's wide band of highly talented amp gurus. This last year I had a chance to meet one such cat, and this has been one of the-if not the most gifted builders I have ever met. This brother has not only introduced me to some new and exciting tone tools, but has also shown me to further appreciate the true meaning of passion for tone. His name is Tommy Aguilar, a laid back mellow individual with a keen insight on amp building and hot-rodding. Tommy and I's path crossed at one of my favorite local guitar shops (Time Warp Music) while doing a regular visit a few months back. What started as a just another gear chat with a fellow tone purist, ended in one hell of a treat. Within Time Warp's collection of impressive gear I would discover a handful of Tommy's hand built creations. Amongst these builds was a 50 watt JMP replica, a couple of hod-rodded amps and pedals, a killer sounding original Apache Amp and matching cab, and last - a curious little black box with a trio of vintage tubes sticking out from it. That little black box would end up being one of the most intelligently designed tone tools I would ever know. Ladies and gents, I'd like to introduce to you the...
------------------------------------------------------------ 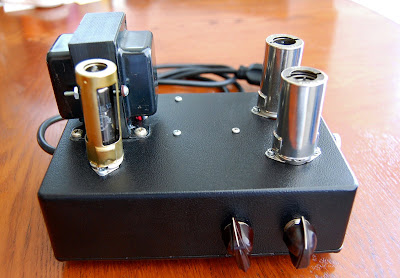 
Features/Controls
-----------------------------------------------------------------------
Imagine being able to hot-rod your amp while at the same time having the option to leave it bone stock, as is, untouched, and untampered. When on a mission to upgrade or mod our amps, what is it we're trying to achieve? To put it simply the answer is - better tone. The hot-rodding of guitar amps is a ritual that has been regularly practiced since the birth of the tube amp, and one that continuously improves as time goes on. Sometimes the amps we choose to upgrade are budget builds, some simple boutique builds, and others DIY kits. But then there's those few that choose to modify their precious vintage pieces. And if there's on sure way to screw up the value of a vintage amplifier it is by opening it up to tinker away at it. So what is the alternative to this? Well, until now there really hasn't been many options. The Rectidrive puts this issue to r-e-s-t. 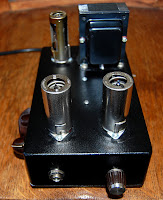 For more info on Apache Amps and the Rectidrive unit itself you can emial Tommy at profeti2001@yahoo.com or contact him here through my site. Tommy is also a genius at hot-rodding amps, building his own designs, and pretty much building you anything you want. You may not find a website leading you to this brother, but that don't mean jack! Stay tuned, I will try and bring you more from Tommy's Apache Amps in the near future.
Posted by Alfie Cruz at 6:50 PM