Super? Yeah we think so.

I must say this has been one amazing year for stompboxes and effects pedal companies in general. It seems like more and more passionate builders are coming out and sharing their talents with us, coming up with innovative designs, and bringing back some old time goodies. One of these companies taking pride in what they do is Phoenix Custom Electronics, a small two-man company making it their goal to build us gear that will inspire us to play, write, and rock out. They come to us from good old Clinton, Michigan and it's quite clear what they're here to do, to create versatility and variety. By using many of the same components that the classic champion pedals of yesterday once used PCE is creating some of the best pedals to hit the streets in years. They use NOS transistors (both Ger and Sil), true bypass switching, Switchcraft jacks (never mounted to their circuit boards), 1% metal film resistors, Orange Drop caps (as well as other high quality caps), powder coated enclosures (better for our environment), and every pedal is tested and played before leaving for it's destination. I doubt you'll get his kind of attention from the big boys. To me this is what it's all about, players building gear for players. Phoenix Custom Electronics is one of those pedal companies who's gear we will be collecting in the years to come. So go out and get your fix and may the gear junky live on! 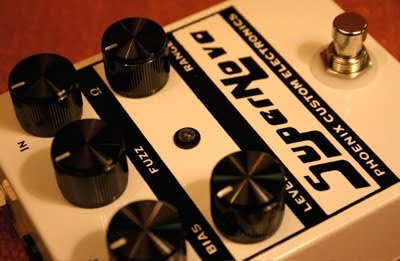 
In the world of stompboxes sometimes less is more, sometimes more is more, and sometimes a bit of both is nice. I'm the kind of player that digs vintage style pedals just as much as modern ones. There's nothing better than having a fuzz pedal that can create authentic classic rock tones and also have the ability to flip into some all-out fuzz madness. Friends this is SuperNova, SuperNova these are our friends. Now that everyone's been properly introduced to one another I can get to some of the SuperNova's characteristics. Not necessarily based on any classic design is what makes this such a special pedal. There is a bit of a vintage vibe to it while at the same time owning the modern side of fuzz. The SuperNova is definitely not your average run of the mill fuzz box, this is a pedal that will keep you busy for a long long time. The pedal sports an intelligent set of controls that work to deliver just about any fuzz tone you can imagine. Every knob responds to the slightest of changes and every setting dishes out a solid usable sound. The SuperNova's controls are Bias, Fuzz, Impedance, Level, and Range. Might seem like a lot knobs for a fuzz pedal but I'll tell you this, there is a good reason for these controls. This is not just another multi-knob mass produced gimmick effects pedal, there is a method to it's design and it is absolutely genius! I was able to get everything from Clapton's woman tones, classic rock lead tones, and chunky overdriven rhythm sounds, to these great modern indie rock tones, clean boosts, and sputery broken speaker effects. One of the best uses I was able to get from this pedal is something I've named the "Triple Threat" setting, by which I mean three sounds from one setting. It's pretty simple actually you just have to know how to manipulate your guitar's controls in the right place at the right time. Set your main fuzz lead tone for all your high-gain needs, roll back the volume for some semi-clean tones, and last switch into your bass pickup for all your rhythm needs. It's beautiful! It's this pedal's control layout that gives it it's magic, every knob interacts with one another to create more sounds than you'll know what to do with. At first you'll notice there's almost too many sounds to mess with, but once you get a hang of how each control works you learn how they all affect each other and you're home free. I have seen Bias knobs on a few of the pedals that have come through here and now I am spoiled, this is something every fuzz pedal should have on it. Listening to the SuperNova one would probably guess it was of the germanium variety, I sure thought it was. It is capable of producing some of the silkiest, smoothest fuzz tones I have ever heard, tones that germanium transistors are famous for. The SuperNova isn't a germanium based pedal though, it's heart is driven by silicon transistors. Because it does run off of silicon transistors you don't have to worry about leakage, unwanted noise, and all the mess that comes with worn-in and bad germanium transistors. I believe it's the combination and design of it's controls that makes it so hard to pin-point. One second you're getting Fuzzface tones, then Fuzzrite, Big Muff, Tonbender, and so on and so on. It truly is one of the most versatile fuzz pedals to ever come through here. Then there's the many different pickups you can play it through. After all we all have our favorites right? For me it was playing the SuperNova through P90's that really sealed the deal. P90's are the one pickup that can be difficult to work into fuzz boxes, at least for me. I was able to play every level of overdrive and fuzz needed, and because of the Impedance knob I was able to use it with many many different pedals and wahs. Ever get home after buying a new fuzz pedal only to discover it doesn't sound all that hot with your favorite wah pedal? Lord knows I've had this problem and it was something I had to learn the hard way. This isn't an issue with this pedal, all you have to do is roll the Impedance knob until you get the sound you want. Simple as that. It would take us a long long time to try and explain just how many different tones this pedal can produce. So we'll just end with this. Need something you can use for any situation? Need the perfect studio tool? Need a fuzz pedal that won't bore you or that sounds like everything else out there?.... Need a fuzz pedal you can actually use and not just something that makes annoying mind numbing soundZ (hint-hint). You got it. It's called the SuperNova from Phoenix Custom Electronics.
For more info on Phoenix Custom Electronics go to www.phoenixcustomelectronnics.com Also look for another feature from PCE next month. We are super stoked to have these cats on board and we'll continue to keep you guys informed as long as they're around. Ahmen!
______________________________________________