It's always a pleasure whenever I get to introduce to you guys a new or company that's unknown to you. With the pedal boom of the last few years we saw many underground builders, boutique companies, and one-man operations. I won't say that it's been easy to separate the innovative and flavorful from the dull and boring. Yet sometimes you come across a product that is so appealing and sounds so good that it makes choosing a simple pleasure. One of these pedal companies that I've discovered this year that has really had an impact on me and influenced my sound is Solid Gold FX. They have a wide range of effects, the few I've heard sound great, and they all look killer. What more can you ask for? For this we of course chose one of their fuzz pedals, the Formula 69. This is a fuzz pedal that is part of that special species of fuzz box, it's sound creates a wall of killer tones. Let's dive in shall we? 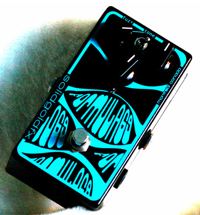 In the world of effects pedals there is one pedal that tickles my tone bone more than others, the fuzz pedal. Fuzz boxes live in their own realm, they have the qualities of distortion, hints of overdrive, and an attitude all their own. The Formula 69 definitely delivered all that a great fuzz box should and at the same time owns some characteristics of it's own. Like any great modern fuzz box it is important that it's design stems from timeless classic, like the all-time favorite Fuzz Face. This is a pedal that many of today's player's will absolutely dig. I've mentioned before that even though vintage pedals sound great they always tend to fall short in one area or the next. The great thing about this is that it left lots of room for improvement. Old school germanium fuzz boxes from back in the day are always a risky pick, you never know if you're getting a good one. Greg of Solid Gold FX made sure he built a fuzz that would work with many guitars, amps, and effects...and he did a hell of a job too. The Formula 69 instantly caught my attention with it's smooth, transparent, and rich tone. What makes this pedal so killer is it's gain matched Si transistors, external bias control, awesome pick attack response, 2-way tone switch, and wide variety of tones. We started with some low but growly type fuzz sounds, with the tone toggle switch set in it's classic mode this was a cinch. I found this setting to work great with both humbucker and single coil equipped guitars. But what I found to sound the best, at least best to my ears was playing the Formula 69 through a Junior style single P90 guitar. It complimented the mid range punch of the pickups and gave it some tonal balance by adding some tight lows and spot-on highs. You would not believe just how well this pedal responds to the guitar's volume knob, and if your picking is dead on you don't even need to lower the volume knob to get semi clean tones. Just work the grit by how soft or how harsh you strum the strings. I've played through many overdrive pedals that can do this but to have a fuzz box that reacts this way is awesome. Next we set the fuzz knob at about 75%, matched the output to our amp, and kept the tone knob to classic. Instead of the fuzz effect getting out of control (which is how most vintage fuzz pedals react) it became thicker, grittier, and maintained it's smooth character. By putting a clean booster in front of it this setting was able to give us every tone needed for both live and studio situations. To get a more cutting and sharp sounds all we had to do was flip the toggle switch to it's bass reduction mode. As we swapped guitars and got to the Strat I noticed just how authentic it's Fuzz Face sounds were, there's nothing like some good dirty, grimy, single coil fuzz tones. Once we dialed in the Jimi tone we had to plug in the vibe and wah wah pedal. I had my rhythm guitar player writing down the settings of every pedal we used, it was off the hook how many badass sounds we were able to get. The sonic boundaries this pedal jumps in and out of are more than enough to satisfy the sickest of pedal junkies. One thing I had to do while we were demoing this pedal was plug it into our little 15 watt head. The outcome was a collection of some of the most dynamic, inspiring, and most useful sounds ever to come out from that amp. Our studio now has whole new arsenal of awesome sounding fuzz tones. Last we blew every knob to max and plugged back into the high wattage amplifier, the streets below the studio definitely heard us that day. One word... smooth. Even in it's highest fuzz settings the Formula 69 held it's smooth sound, I was highly impressed. Sustain sounds like absolute fuzz heaven in your fingertips, solos howl like banshees, and chords sound huge. To get even more grit our of this pedal we set the amp with some low/med drive, getting a killer tone was as easy as setting everything to noon. Usually I find myself fiddling with an amp's tone stack to get the sound I want, not with this puppy. Because the 69 is so transparent and it's tone so well balanced, it makes it easy to work with just about any tone setting. This means that all pickups will sound good through this pedal, any amp, many many pedals, and any guitar you throw at it. Solid Gold FX has easily become one of Analog War Cry's gem finds and a company we will be keeping our eyes on for a long time. If you're thing is traditional and classic fuzz tones with modern capabilities this is the pedal for you, it is damn near impossible to go wring with the Formula 69. Keep it golden baby!

For more info on Solid Gold FX go to www.solidgoldfx.com Also stay posted for more features from this killer company.
Posted by Alfie Cruz at 1:24 AM