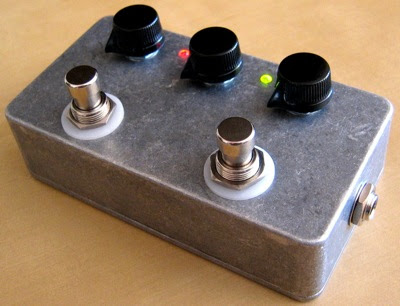 Boosters... they can be tricky at times, choose poorly and they're capable of sneaking in and stealing that special sound you've worked so hard to get. Some color your tone, some just get too muddy when you crank them high. A good booster on the other hand can make all the difference in the world, they polish up your chorus licks, let your solos scream, and help you standout in the mix when that sea of howling tones is flying wild up on the bandstand. Then there's the great ones, those special breed of boosters that are capable of pushing your amp into golden rock god territory. Meet the AnalogMP GCRS boost/distortion, a two channel little demon on a mission to be heard.

The GCRS was loosely based on the Zvex Super Duper 2 in 1, the difference being the build/component improvement, and most importantly the price! It might not sport the fancy paint job but it's guts are sure as hell top notch. It has a custom made circuit board, improved supply voltage buffer, metal film resistors for less noise, audio grade caps, and of course is true bypass. The GCRS's duel class-A preamps are capable of boosting your signal up to 3600 times (that'll get your tubes a cookin), it's extremely high input-impedance (>5 ohm) refuses any current flow from your pickups which will give your tone crisp'n'clear definition, and just the like Super Duper offers up to four different volume stages. EXAMPLE: Stage 1. Your amps pure non-boosted tone. Stage 2. The right boost switch which is driven by the right gain knob alone. Stage 3. The left boost switch which is driven by the left gain knob and middle master volume. Stage 4. Both switches engaged, cascade channel 1 into channel 2 for some dirty dirty goodness. This is the perfect pedal for those of you who play single channel amps, or for those that only use their clean channels and rely on pedals for their overdrive and distortion. Combined with it's tone quality and size it can save much needed pedalboard space, and keep you from tap dancing, break dancing, and leg breaking. The GCRS is built to be powered by your choice of an internal 9v battery, standard 9v power supply, both, and for you "green friendly" players can be built with only the 9v power supply jack for a clean serene environment. Oh and just in case you didn't know, a 9v power plate for the original Super Duper costs $29. I tell you my friends, you can't go wrong with this little gem, I have one and I am well over satisfied. 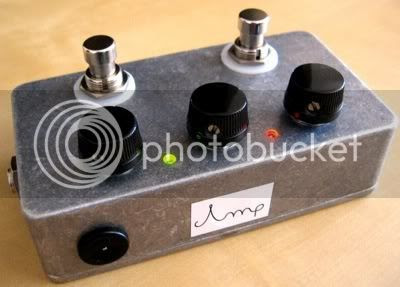 AnalogMP also builds true bypass loopers of every number and size, single channel and mini-boosters, power supply boxes, and will even build you your own custom loopers upon request. Paul the captain of AnalogMP has been interested and involved with electronics in one way or another his entire life. He got started in the pedal building scene while attending electrical engineering school in Munich, his first product was a Keeley inspired single channel true bypass looper. His customers being impressed with his work began asking for custom builds, and soon he found himself building double loopers, triple loopers, boosters, and so on so on. Finding enclosures large enough for him to fit his designs became difficult and far too expensive to keep on building. Fortunately the pedal boom was right around the corner, products for the DIY scene began to catch up and so Paul continued on with his venture into tone tweaking. Paul recently built the world's largest true bypass looper, a monster of a pedal rocking 13 true bypass channels, a tuner out, and a master bypass switch. For more info on AnalogMP products click the AMP logo in our links or visit their blog at www.analogmp.blogspot.com  Any questions can be sent directly to Paul at analogmp@gmail.com
Here Paul's gigantonormous 13 channel true bypass looper. 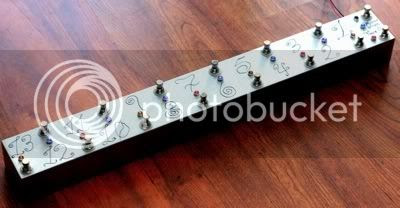 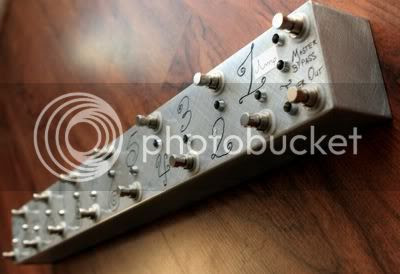